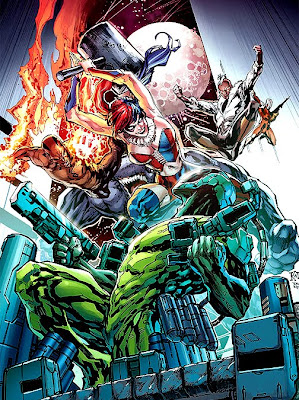 Well obviously Harley is still an active member with Task Force X. It'll be really interesting to see how she manages to remain on the team and why Waller is allowing it after everything Harley put them and Waller through recently. As you can see here the terror organization Basilisk (Kobra in the previous DC Universe) is back which means we hopefully may see Captain Boomerang again. I dunno who the guy with the white mohawk is but I hear a traitor on the Squad is finally revealed!
Posted by Shlomo Ben Hungstien at 2:32 AM 7 comments:

Deadshot takes out Bullseye in the arena of DC vs Marvel 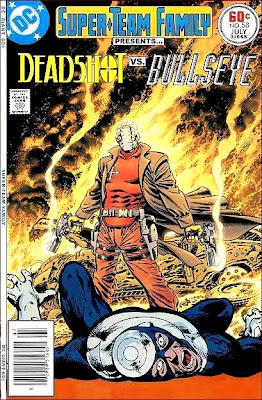 Bullseye is quite a bad ass who like Deadshot never misses. So in a hypothetical showdown between the two it's quite plausible that their roles as you see here might turn out in the reverse. But since this cover concept looks so awesome staged as it is and because this is after all is The Suicide Squad blog I'm happy to present this cover concept here as is from the Super Team Family blog spot: http://braveandboldlost.blogspot.com/
If you like this then you'll probably also dig my Bronze Tiger vs Iron Fist cover concept as well: http://thebronzetiger.blogspot.com/2012/01/dave-to-rescue.html
Posted by Shlomo Ben Hungstien at 12:31 AM 10 comments:

Suicide Squad #7 review: Try not too loose your head hunting for Harley 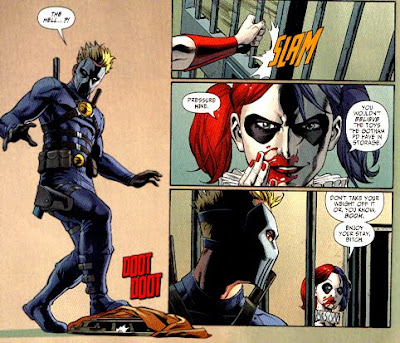 Here comes another issue of action packed shock and awe with plenty of creepy psycho stuff going on that didn't disappoint! So let's jump right into it. The issue opens up with King Shark going on a rampage outside G.C.P.D HQ in order to distract the police while the other members of The Squad are inside beating up the cops and looking for Harley (see previous posting). Lime n' Light use their holograph projection powers to make KS look like Clay Face to maintain his cover.
Inside police HQ Harley uses various items stored there like land mines and road flares in order to out wit both Savant and Deadshot (she's so bad ass!) and get the drop on them both (but not at the same time). Outside King Shark and Lime n' Light try to make good their escape but Lime is injured by police fire and is captured. She attempts to spill her guts about the Squad to the authorities and Queen Waller basically says off with her head and detonates her nano bomb http://insidepulse.com/wp-content/uploads/2012/03/SuicideSquad_7_011.jpg
During a flash back seq 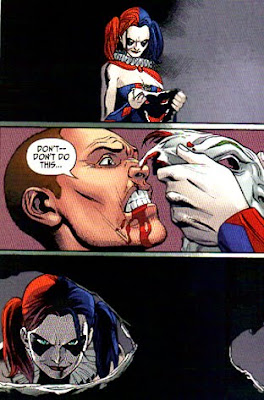 uence we see Harley completely go around the bend when she realizes her supervisor has been stealing her research while at the same time chastising her emotional connection to the Joker. Harley helps the Joker escape Arkham and in return Joker takes her for a chemical swim "birthday" (indoctrination) which explains her "skin condition" http://insidepulse.com/2012/03/15/dc-comics-relaunch-what-is-harley-quinns-new-origin-how-does-her-new-look-tie-in/
Back in real time Harley has Deadshot tied to a chair in some kind of bizarre psychological ritual that involves her making Lawton wear the Joker's face in order to give her the illusion of being reunited with her lover. But little does she suspect that Lawton has worked one of his hands free and goes for a miniature double barrel single shot gun hidden in the heel of his boots. He then shoots her in the gut which brings their little role playing game to an abrupt end http://insidepulse.com/wp-content/uploads/2012/03/SuicideSquad_7_021.jpg So ends that issue which leaves the Squad with a body missing a head, Harley in critical condition and Yo-Yo presumably still inside King Shark since we don't get to see him in this issue. If you haven't read the issue you can refer to the previous posting to read at least a portion of it online and I'll post links as I find them to other online pages for this issue. 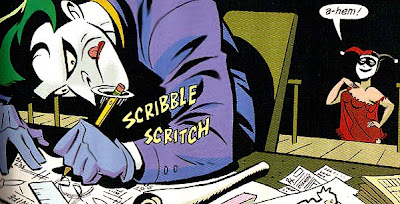 I just got done reading Paul Dini & Bruce Timm's MAD LOVE thanks to a co-worker who loaned it to me this weekend. It's quite interesting to see the juxtaposition between how the relationship between The Joker and Harley unfold as opposed to how it has so far in the relaunch universe as seen in Suicide Squad #6. It's quite similar so far but from what I can see the biggest difference is the Joker's past defeats by Batman having made the him an even more sympathetic patient to Harley beyond the bullshit stories (just like in Batman: The Dark Knight) he fed her about his broken child hood.
So aside from th

at little trip down memory lane from the old DC Universe I offer you all an opportunity to read the first 5 pages of Suicide Squad #7. But if you think you can wait till next week I'll shoot to have a full review out on new comic book day. Either way be sure to come back here I'm sure the continued Harley Quinn origin story will not disappoint.
http://comics.ign.com/articles/122/1220446p1.html
Posted by Shlomo Ben Hungstien at 9:27 PM 8 comments: