I was planning on buying it this weekend when just last night I discovered the latest DC animated feature was already on youtube in the form of a series of videos making up a total of 6 parts. So, the 3 or 4 of you reading this here's what I thought of the movie. In a nut shell it was a sequel to Justice League: War wrapped in an Aquaman origin story line. Before you read on this review is really intended for people who have seen the movie not because I have spoilers but because it will make better sense if you have.
Overall it wasn't a bad movie and it entertained me for the most part. Did it have the epic grandeur of Justice League Flash Point? The character development of Batman: Under The Red Hood? Or the entertainment value with it's dialogue and action as seen in Batman: Assault on Arkham? No, not really but that's not to say it didn't do a decent job of developing the individuals of The League such as the budding love affair between Superman and Wonder Woman and Victor Stone coming to terms with his life as a cybernetic organism. And of course we get to see more of the usual smart ass quips from Green Lantern along with some adolescent male humor provided by Captain Marvel. The Mera character was something of a surprise as a supporting role for the heroes that I liked and as for the villains . . Orem and Black Manta I would describe as adequate.
As for Aquaman himself they did a fairly good job with him as an origin story although there was some shit that annoyed me like a knife shattering against his skin as if a knife is made of a brittle material that would break like that. His journey as someone with a mixed heritage with a mystery back ground to becoming part of The League was handled fairly well I especially liked how he was a booze hound at the beginning of the movie. The high point of the final battle was definitely the way Aquaman defeats Black Manta although the battle it's self was otherwise . . . standard and kinda under whelming. On a high note the post credit scene of Lex Luthor visiting Belle Reve certainly intrigued me. BACK ISSUE magazine from TwoMorrows Publishing is a fairly recent discovery I've made only as of late last year. I love how they have old copies of their magazines easily available for free to read online. The commentary on the second page of the article was pretty funny but you can read this entire Suicide Squad article at this link  . . .
http://twomorrows.com/index.php?main_page=product_info&cPath=98_54&products_id=619
Posted by Shlomo Ben Hungstien at 1:19 AM 5 comments:

The Bat vs The Spider

So here we are my first bit of fan art 2015. I just did this on a whim this past weekend which was a nice and relaxing one I must say. For a little while now I've had this idea in the back of my head to do something with Black Spider. As a ninja version of  The Punisher in the DCU I'd like to see the character get a bit more notoriety.
Posted by Shlomo Ben Hungstien at 8:50 AM 11 comments:

Along came a Black Spider 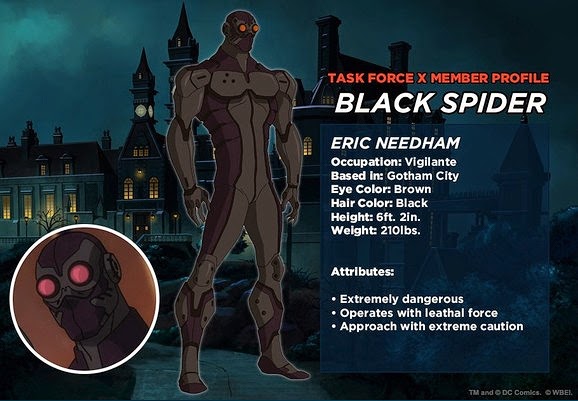 I was really enjoying the mano a mano throw down between Black Spider and Batman in Assault on Arkham it's too bad it got cut short by a mis thrown boomerang by the good Captain. Have a look at the rest of The Squad files from Assault on Arkham . .  .
http://www.dccomics.com/blog/2014/08/05/batman-assault-on-arkham-meet-task-force-x 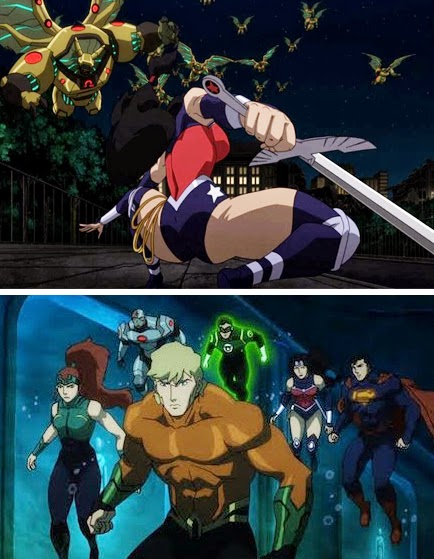 Speaking of DC animated films I just got done watching Justice League War on youtube I finally found an actual full movie upload as opposed to the bogus channels that just have in the title "full movie" only to find some bullshit. It wasn't as good as Assault on Arkham or Batman Year One but it was still fairly good even though the parademon/Darksied fight scenes got to be a bit tedious. Can't wait to see Throne of Atlantis it's probably gonna be the only thing from DC worth looking forward to in 2015.


I'm posting this old school fan art of the Martian Manhunter just for the hell of it. Some retro fan art to help usher in the new year as it were : )
Posted by Shlomo Ben Hungstien at 12:00 AM 5 comments: