Suicide Squad #6 review: Harley's origin, eaten but not dead & the lies beneath the lies!

The story: If you checked out the #6 preview link a couple of postings back then you'd see that the issue opens up with the Squad ( Deadshot, Savant, King Shark, Lime & Light ) in Gotham fighting a bunch of Harley Quinn cosplay transvestites. As far as I'm concerned this could also be taking place in San Francisco California. The story then switches to Harley at the institute where she first encountered the Joker while she was working as a shrink. She's there looking for information 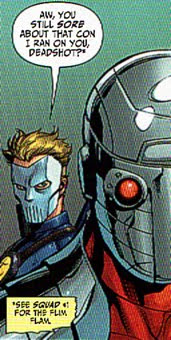 on where to find the Joker and it's then that we're treated to these flashback sequences of how their "relationship" first got started. You can see some of that origin recap from the issue here: http://scans-daily.dreamwidth.org/3608710.html Meanwhile the Squad defeats the Harley Quinn transvestite goons after which we get treated to some pretty shocking revelations. It turns out Savant was part of the whole bogus torture/interrogation sequence in issue #1. What appeared to be Savant cracking under pressure and spilling his guts was really part of Waller's deception in order to determine which of Belle Reve's convicts was worthy of being part of Task Force X. We also find out that Yo Yo wasn't killed when King Shark ate him. Although I don't know how much longer Yo Yo can survive inside of King Shark's mouth. The issue wraps up with Harley discovering that Joker's "face" is with the Gotham police and goes to police HQ to get it. But instead of trying to sneak in or fight her way in she turns herself over to the GCPD which means if the Squad wants her back they now have to go up against the police.

My thoughts: Just when you think you know where the story is leading you in this title it fakes you out with a twist or turn you never saw coming. This is another great issue that has it all. It's got action, dark humor, psychological power play, shocking surprises and psycho transvestite mutants. Rather you're a Joker fan, Harley fan, Suicide Squad fan or a fan of all three like me then rest assured this issue is for you and worth every penny of the $2.99 cover price.

ess who this is?. If you want to check out some preview art and commentary of upcoming issues follow this link. You'll see that even after the Hunt for Harley Quinn story arc is done there's gonna be much more cool shit in store for us in the pages of the Suicide Squad.
http://insidepulse.com/2012/02/11/four-pics-five-spoilers-dc-comics-doubles-down-on-villainy-the-multiverse-adult-ex-sidekicks-more/
Posted by Shlomo Ben Hungstien at 6:25 PM 16 comments:

El Diablo on "A Stairway to Heaven" with Task Force X? 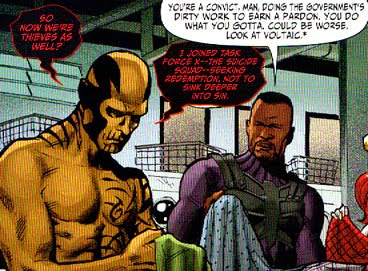 Getting readers into the cross over characters from the old DC Universe into the relaunch like Waller, Deadshot or Harley Quinn has proven to be a challenge for DC writers. So you can imagine how difficult it must be to write new characters (new to me) for readers to get into. In the case of El Diablo (real name unknown as of yet) it's certainly working so far at least as far as I am concerned.
So let's talk about what we know about what I described before as the "conscience of the group". Not to mention Harley Quinn commented before how El Diablo wasn't very "super villainy". El Diablo was some sort of Latino gangbanger that accidental killed a family with his powers during a gang related turf battle. At some point (probably during his incarceration) it appears as if he "found Jesus" and now works on the Squad for some manner of redemption. Certainly not the most original back ground story but it works for El Diablo in part because it adds yet another element of friction on the team and because his sincerity seems to be so genuine. Willing to bend over back wards to avoid killing, we also have seen that he is quite capable to making some one as dead as fried chicken if need be such as in the case of the last issue in which the Squad was used to quell a prison riot.

His pyro-kinetic powers are perhaps his biggest mystery of all. As of yet we don't know if he has his power as a result of a mutation, some kind of science experiment or accident or if his powers are super natural in origin. The only thing that seems to be fairly certain is that they have some connection to his tattoos. Whenever he unleashes his power he temporarily looses some of his body ink. And as such it returns as he recuperates.

One of the most ironic things here about this character is that he is probably the one member on the Squad who has "seen the light" and yet his operative codename is The Devil. You almost gotta love the character for that alone. Based on the preview art for upcoming issues it appears El Diablo will be around for a bit longer at least. I certainly hope so but then again this is the Suicide Squad which means very little . . and hardly anyone lasts forever. 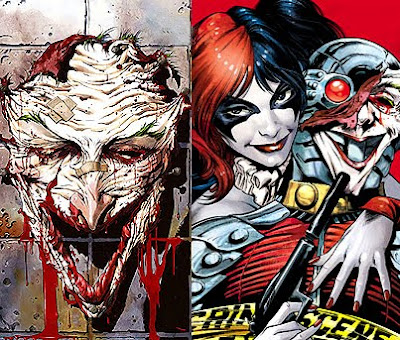 “Brilliant, driven people are already a little crazy.” laughs SUICIDE SQUAD writer Adam Glass. “What we do with Harley Quinn is show the tipping point.” THE HUNG FOR HARLEY QUINN is a two-part meat grinder in SUICIDE SQUAD #6 and #7. Revealing among other things–the origin of Harley Quinn. While this is very much a Harley story, the Squad doesn’t take a back seat to anyone.” Glass continues. “Along the why King Shark has been acting so strange, the identity of the two female members (familiar faces to New 52 fans) and how Savant — who “died” in issue #1 could possibly be on the team. And will we learn the truth behind Harley’s bone-white skin? “Yeah…, finished Glass, “but remember I can only promise you a good story, not a happy ending.” 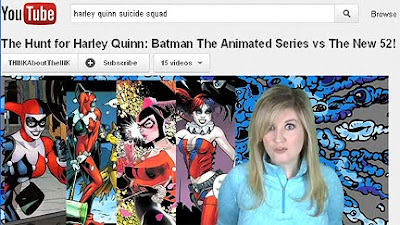 Here's a cool lead up to the upcoming Hunt for Harley story line as
well as a quick but comprehensive Harley Quinn origin recap.

From what I've been seeing it looks like this book is taking on a real "Silence of the Lambs" kinda creepiness to it. I think Harley could give Hannibal Lector a run for his money when it comes to maniacal intelligence and cunning. For those of you who don't like spoilers you may want to avoid this link. But for those of you like me who can't resist taking a peek and at what's under the X-mass wrapping before it's time to open a present you can read the first 6 pages of issue #6 here:
http://www.theouthousers.com/forum/viewtopic.php?p=2717129
““Brilliant, driven people are already a little crazy.” laughs SUICIDE SQUAD writer Adam Glass. “What we do with Harley Quinn is show the tipping point.” THE HUNG FOR HARLEY QUINN is a two-part meat grinder in SUICIDE SQUAD #6 and #7. Revealing among other things–the origin of Harley Quinn.”

Read more about New interior art from SUICDE SQUAD #6 revealed | Joker's Lair on:
http://www.jokeruniverse.com/?p=4470&utm_source=INK&utm_medium=copy&utm_campaign=share&
““Brilliant, driven people are already a little crazy.” laughs SUICIDE SQUAD writer Adam Glass. “What we do with Harley Quinn is show the tipping point.” THE HUNG FOR HARLEY QUINN is a two-part meat grinder in SUICIDE SQUAD #6 and #7. Revealing among other things–the origin of Harley Quinn.”

Read more about New interior art from SUICDE SQUAD #6 revealed | Joker's Lair on:
http://www.jokeruniverse.com/?p=4470&utm_source=INK&utm_medium=copy&utm_campaign=share&
““Brilliant, driven people are already a little crazy.” laughs SUICIDE SQUAD writer Adam Glass. “What we do with Harley Quinn is show the tipping point.” THE HUNG FOR HARLEY QUINN is a two-part meat grinder in SUICIDE SQUAD #6 and #7. Revealing among other things–the origin of Harley Quinn.” 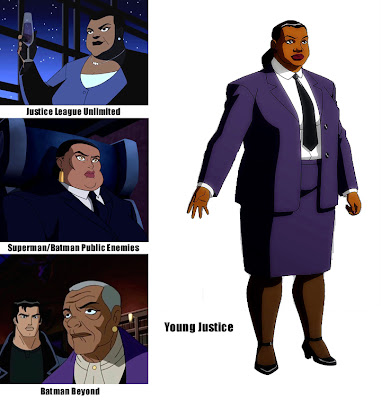 I just felt like making a collage of the various versions of Amanda Waller through out the animated media she has appeared in over the years so far. Notice how in the Young Justice version she's more feminized? Although not quite at Angela Bassett's level but still considerably more feminine then the short haired and stout figured version from JLU. If you haven't seen this Amanda Waller clip from Batman beyond you need to it's a great example of how she's still awesome even as a retired elderly woman :
http://www.youtube.com/watch?v=zj-pD2QQuwI&feature=related

Here's some character model shots from animated TV shows I found on
Deviant Art I decided to add to this posting for your viewing pleasure. 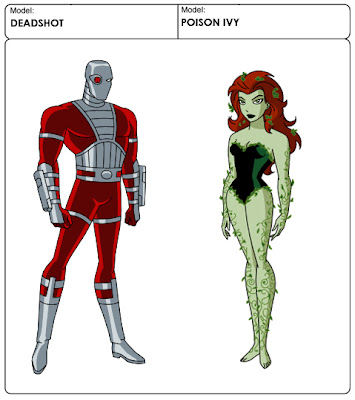 Posted by Shlomo Ben Hungstien at 12:03 AM 8 comments:

Black Orchid cosplay: really hot, and the costume is nice too 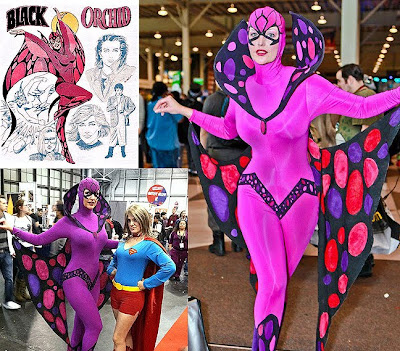 Judging by the Supergirl cosplay woman she's standing next to Black Orchid here must be around 6 ft or perhaps even a bit more. Which means she's taller then me by at least a few inches. Is it odd that it makes the Black Orchid cosplay lady even hotter to me? 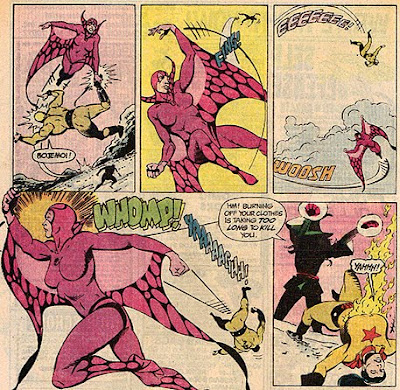 Feb. 4th update: If you've been following the comments in this posting then you know this cosplay lady is DJ Spider. DJ is something of a celebrity on the cosplay/con circuit. You can see more of this 6'1" bombshell in her amazing custom made super hero and villain costumes on her FB page: http://www.facebook.com/thatDJSpiderCostuming?sk=photos