Finally I had me some quality down time for the first time in over 2 weeks now so I was chillin a bit with Youtube. I just want to start off by saying that there are a lot of these videos for Young Justice as well as other animated shows featuring the voice actors and I'm working on trying to watch them all when I have time. But this one makes for a nice introduction for those of you who haven't scene any of them so far. It just blows me away which actors turned out to be the voice of some of the characters on YJ.
In some cases I knew it right away such as with Bruce Greenwood (Batman) or Marina Sirtis (Queen Bee) and in other cases I would have never guessed it in a million years such as Lex Luther who's voice is done by Mark Rolston who played Drake in ALIENS and you probably also know him from The Shawshank Redemption. In regards to this video what totally caught me off guard was which actors did the voices of Bane, Kobra, Sportsmaster and King Farady. Still miss this show so much fuck you CN!


I've been getting around to watching more of these voice actor videos and I'm luvin em so far. I especially love those "I thought that's who that was" moments as i watch them. So I think I'll keep posting the youtube vids for the DC animated movies I've seen that I thought were good.


These DC animated movies are really the only thing from DC worth spending money on these days. With both Young Justice and Green Lantern off the air now these movies are as good as it gets when you want something to watch.

Almost forgot this one. That rounds out all the DC animated movies I've seen in full that I thought were good I was able to find these voice actor vids for.

Posted by Shlomo Ben Hungstien at 2:28 AM 4 comments: 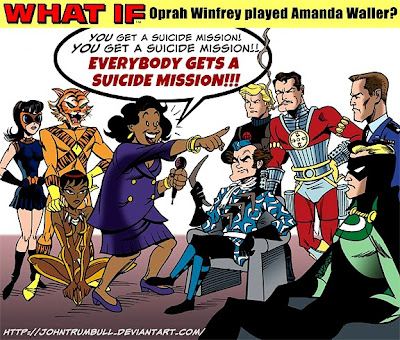 Hat tip to Dale Bagwell for finding this. I haven't been able to find any new fan art for the Squad from the old DCU for months now. Nothing but bullshit from the New 52 and even the WW II Squad both of which I could give a rat's ass about. You can find more stuff from the guy who did this here: http://johntrumbull.deviantart.com/art/LIID-106-Reboots-of-Future-Past-327006067
Posted by Shlomo Ben Hungstien at 12:00 AM 9 comments: