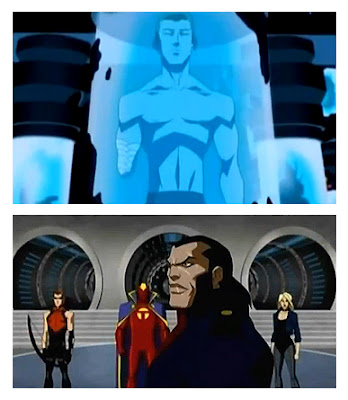 I've always liked this show as all the followers of this blog probably know by now. But last weekend's episode (26) just hit it out of the park! Pretty much every ongoing sub plot that's been running through the series for months now have finally started to come together and there have been surprises a plenty. On one end of the story there's loose ends being tied up while on the other end we see matters begin to unravel which includes among other things the discovery of a certain Roy Harper, minus an arm. 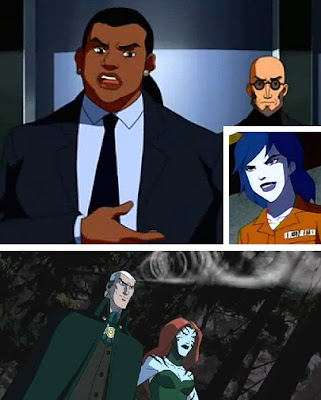 We also find out that Amanda Waller having been unseated as the warden of Belle Reve by the prison psychiatrist Hugo Strange (episode 11) was actually just one part of a far reaching conspiracy plot by some sort of ominous organization known as "The Light" which has been around pretty much since the beginning of the Young Justice cartoon's inception. Even the Injustice Society (Wotan, Joker, Atomic Skull, Black Adam, Count Vertigo, Poison Ivy) played a part in the conspiracy plot with their supposed defeat at the hands of the Young Justice Leaguers in episode 14. If you haven't been watching this series you've been missing out! Along with the Suicide Squad relaunch let's hope we see some more original Squad members in this series too.

How I would love to see a scene much like this on Young Justice someday. Be sure to check back here May 1st I'll be showing you all some professionally done Suicide Squad art work from 1987 that was never published .

Posted by Shlomo Ben Hungstien at 1:33 AM 9 comments:

Who's reading the new Suicide Squad from the old DC Universe? 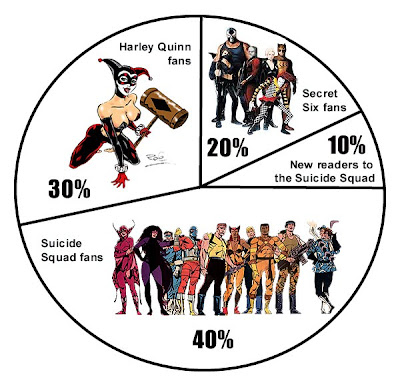 This break down isn't based on any hard evidence this is just my estimation and needless to say there's some room for debate on these percentages. However, I think the majority of current readers of the Squad are old school fans and even for those that are enjoying the book I think it's safe to say what they are all going to want sometime soon.
Now I have to give credit where credit is due because the producers of the Suicide Squad relaunch have gambled on a pretty risky formula with everything from Waller's weight to the Task Force X roster. Although as far as the fuss over Harley's costume was something I don't think DC ever saw coming. And so far they've handled it all pretty well with some great story telling and good character development. But at the end of the day the majority of the readers are gonna want to see something close to the original Squad together again along with or with out some non-original members in the mix. With out that crucial ingredient being added soo

n I think most people will eventually walk away from this book. I'm sure DC wants the Suicide Squad relaunch to stand on it's own legs and not be dependent on too much cross over from the old DCU but I would urge DC to remember that "the customer is always right". In this case we're the customers.
I'm sure some of the current readers like myself would also like to see Checkmate finally show up especially since Waller made a reference to that sister agency in issue#2 . Some good characters came from that title such as Sasha Bordeaux. Besides you can't have a DC Universe that has Kobra (now called Bisalisk which I think is kinda lame) and not Checkmate. That's like having Cobra and no G.I.Joe or a french fries with out mayonnaise if you're from Holland (yeah, I know).
Throwing a bone to Secret Six fans by having Bane, Catman (but with a new costume please!) or perhaps Cheshire come aboard would probably be a good idea to. I really liked Cheshire in the Villains United mini-series and she's awesome in Young Justice (which I still watch and love). She's sexy and I love her whole smart ass shit talking it reminds me of my Youtube videos. But is there room on Task Force X for both Cheshire and Harley Quinn? Would they play well together? Plus, that's a real handful even for Waller. And as for the Harley Quinn fans who don't like her being in the Suicide Squad I say fuck em they're a bunch of assholes.

Speaking of bringing original Squad members back into the fold I found some cool stuff on Deviant Art recently. Not only is it a good stand alone piece but it would make for a great cover too. This artist really has a good eye for layouts and I would know given that I used to work in publishing as a graphic designer. Preview art for issues 9 and 10 suggest a DC 52 debut for Werner Vertigo. Let's hope that's the case and that this will be part of an ongoing trend of the old school Squad characters making their DCU relaunch debut. 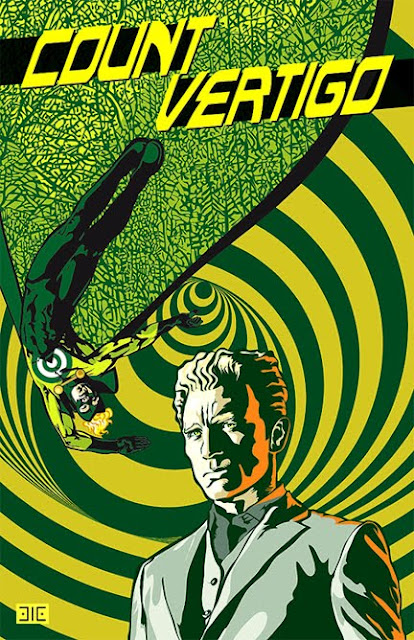 You can see more of this guy's work at his Deviant Art gallery: http://travellrtheouterdark.deviantart.com/
Posted by Shlomo Ben Hungstien at 8:00 AM 9 comments: 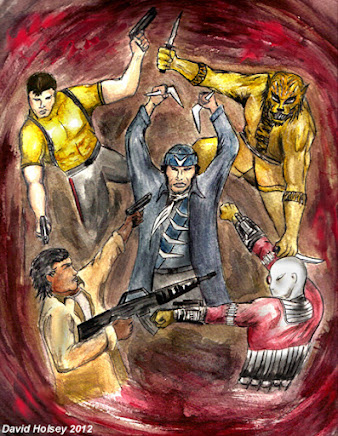 I'm going to update this posting in light of the comments I've gotten so far about this fan art. DC, if you're reading this (which I seriously doubt) I want you to know that the key to the long term success for this title is to somehow start bringing the original Squad back into the fold in the near future. You guys have done a pretty good job so far and this book passed it's first major hurtle by not being one of the 52 cancellations a couple of months ago. Heed my words Adam Glass and DC! relaunch and all there are many who will never feel like this is REALLY the Suicide Squad with out key characters like Rick Flag, Bronze Tiger and Boomerang. YOU HAVE BEEN WARNED.
Posted by Shlomo Ben Hungstien at 12:02 AM 18 comments: 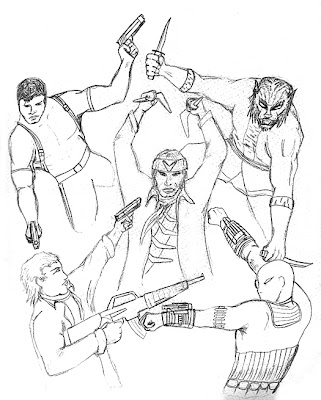 I imagine I'll get started and finish coloring this by early next week. At which time I'll be posting it of course. This will give me an opportunity to work with water colors again.
Posted by Shlomo Ben Hungstien at 6:16 PM 4 comments:

Suicide Squad #8 review: Picking up the peices with more trouble just ahead 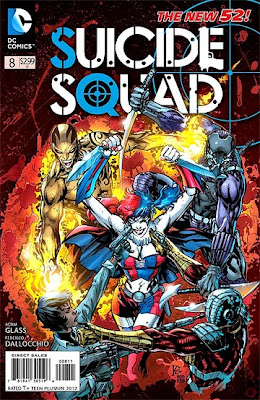 Unlike my other Suicide Squad reviews thus far I'm including the cover in this one cause I think this is the best cover so far in the relaunch series and may well be one of the best comic book covers of the year period! In fact, I don't know when I'll have time for this but I'm setting my mind on recreating this cover layout using the original Squad consisting of Waller, Rick Flag, Bronze Tiger, Boomerang and Deadshot of course.
Onward to t

he review: Basically this issue consists of Waller bullying all the members of Task Force X into keeping them in continued compliance for ongoing missions. One exception being Savant who Waller tries to convince in staying with The Squad and becoming team leader but he declines with surprisingly little resistance from her. And where Harley is concerned I think Waller let her off a bit too easy I was expecting way more ball busting from The Wall. Waller is also making use of a former Basilisk scientist who apparently has some sort of "healing factor" serum which has been used to get Harley Quinn and Black Spider back to 100%.
Other interesting things that come to light in this issue is that Waller knows about King Shark having eaten Yo-Yo but seems to be unaware that Yo-Yo isn't dead . . . yet. It turns out that Basilisk is responsible for having planted a double agent on The Squad although their identity has yet to be revealed. And we also get to see Lawton finally start to grow his signature "stache" in thanks to the facial laceration Harley gave him in the last issue. It also seems that Waller actually feels some sense of empathy for Black Spider's tragic past and offers to let him leave The Squad with no strings attached. But Black Spider buries his past pain through his relentless pursuit of criminals so of course he's not going anywhere for now. Toward the end of the issue the team is sent to Metropolis and kill Mitch Shelley a.k.a Resurrection Man.
This was probably not the most dynamic issue of the bunch so far because it's really an issue that seeks to "pick up the broken pieces" of all the recent calamities of Task Force X while prepping the readers for the next story arc. But it's still a good read from a character and plot development stand point. Also, the art work was insanely good among some of the best in the series so far I really loved it. 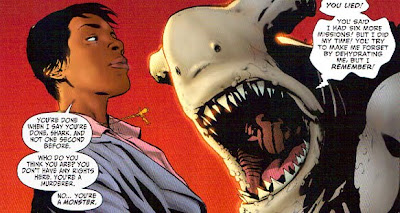 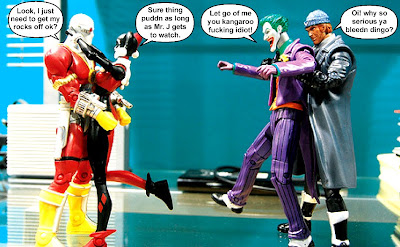 You could really have some fun coming up with plenty of different dialogue bubbles for the top scene there but this happens to be what I came up with. Somebody out there please come out with a custom Harley Quinn figure from the Suicide Squad relaunch. I'm always looking for new ways to irritate Harley fans who get get over her new out fit or about her getting it on with Deadshot. You can magnify the image for easier reading. 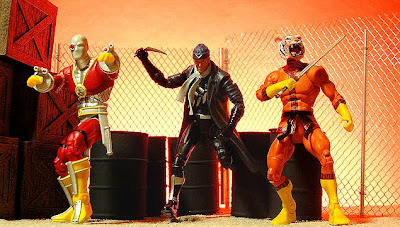 As for this photo you don't really need to say anything the scene just speaks for it's self. You basically have three guys who don't like each other much but are determined to go down fighting together if that's what it comes to. Be sure to magnify this one it looks especially cool blown up. Suicide Squad #8 shipping next week stay tuned!

Some recent blog postings from the Sanctum Sanctorum and the I Love Comic Book Covers blog inspired me to see if I could find common cover art concepts between my collections of my favorite titles ever from both Marvel and DC. I believe I've found a few winners here.

I decided to throw this set into this posting too even though I'm sure many of you know about it already. I just think it's so damn cool how they used the Exorcist movie poster theme for the Amanda Waller appearance in this issue of Justice League of America. 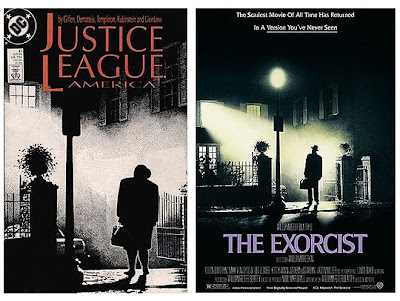