The following videos are from what I think are the best comic book reviewers on Youtube. I like how they do everything from how they display the clip to the snarky sarcasm and how they always keep their reviews on point and with the right running time. As far as I'm concerned despite factors like Black Manta, Deathstroke and Deadshot actually looking like Floyd Lawton and not like Rick Flag for a change this 2nd volume of DC's rebooted Squad basically looks like more of the same to me.
I can only speculate why DC felt like they needed to rebrand this title but it ain't gonna get me to spend my money any more then the last one did after I dropped the book. And why is Captain Boomerang absent from the line up again? It was a case of too little too late when they finally had him come back to the team in the last series but at least it was one of those rare occasions in which the writers did something that did justice to the Squad.

This weekend I found this issue in a $1 box and even though it wasn't something I was hunting for it turned out to be a good grab. The issue opens up at Belle Reve with Nightshade talking to father Craemer and basically giving him her life's story starting with her childhood leading all the way up through the events of Suicide Squad 1 - 13. As some of you may know Nightshade is the daughter of a fugitive princess from "The Land of Nightshades" who ended up marrying some up and coming politician who is Nightshade's father. And as we see here Nightshade joined the Squad as an eventual means to an end for some personal matters.

As far as I know Nightshade never hooked up with either Flag or Nemesis. Like she said here Flag took the Squad way too seriously and Nemisis, . . . well even though she did feel something for him too he was just that "nice guy" and we all know how that goes.

On the other hand I'm pretty sure she did hook up with Captain Atom given their long history together even though some where along the lines he was also tapping Plastique's ass. But can you blame him I bet that French Canadian action must have been . . .explosive. Captain Atom may be "Nobody's favorite super hero" but at least he gets plenty of tail. 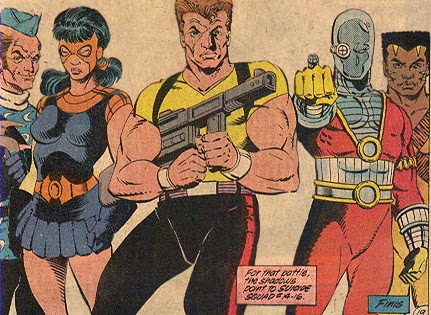 As you can see from the footnote here this story concludes with a lead in to Suicide Squad issues 14-16 which was the Nightshade Odyssey story line in which Nightshade would finally get to use The Squad on the before mentioned personal mission. Interesting enough upon reviewing those issues I now see that there is a footnote for Secret Origins 28 in Suicide Squad 15.
Posted by Shlomo Ben Hungstien at 12:03 PM 9 comments: