For all you Waller is too skinny & I hate Harley's costume cry babys out there I got something special for ya! 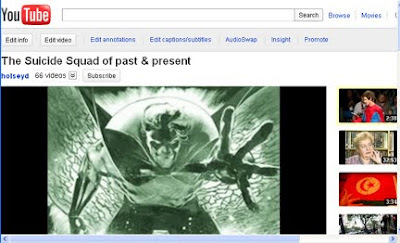 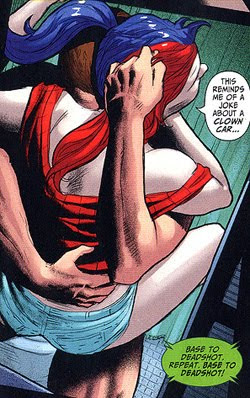 Summery: The issue opens up with a some gun toting hockey mask wearing bounty hunter by the name of Mad Dog trying to apprehend the Squad. Some rather innovative quick thinking on the part of Harley allows them to escape that jam and the Squad tries to lay low in Madisonville as they wait for their evac. Because of his inability to "blend in" King Shark is told to stay put in the woods while the other remaining Squad members temporarily go off in pairs (Deadshot-Harley / Diablo - Black Spider).
Harley, who has become increasingly more infatuated with Deadshot due to his leadership role and his lack of emotional availability makes some rather strong advances toward DS who initially resists but not for long. Meanwhile, while off looking for supplies with Black Spider, Diablo finds out through the news that Voltaic was shot and surmises that it was Deadshot who killed him and not the tech zombies.
Mad Dog catches up the the Squad again but a brief gun battle puts an end to Mad Dog's henchmen and has him on the run into the loving embrace of King Shark. Black Spider is seriously injured but with Diablo's help (and Harley's!) makes it to the evac. Deadshot delivers the baby and just when they think the mission is over they get new orders to stay in the field for the next mission. Along with new orders they get some fresh recruits, some guy named Yo-Yo and Captain Boomerang. And it gets better, apparently Boomerang is the new mission leader!

My thoughts: If you were thinking that maybe I liked it based on the summery you would be right. With the more established characters like Deadshot, Harley and King Shark we see a consistency with what we would expect in terms of character development. Harley especially really shines in this issue with her usual antics and even with a moment of uncharacteristic display of what appears to be compassion at one point. They've also started to give Black Spider a little more to do in the story who for a while there I was thinking was gonna be the next casualty. Diablo is still pretty cool as the "seeking redemption" member of the group although I have a bad feeling about him down the road. I'm curious to see what this Yo-Yo guy is all about and of course who's not happy about Boomerang joining the Squad. It's starting to feel a little more like the good old days of the John Ostrander Squad again although we don't get to see too much of Waller in this issue. By the way it seems in this Suicide Squad reboot Deadshot and Boomerang already know each other but more on that later I'm sure and it appears as if Deadshot may be infected with the virus even though he hasn't displayed any acute symptoms as of yet.

Warning: Any comments complaining about Waller's weight loss or Harley's sex appeal will be deleted. I've had it with people whining and bitching about that crap so I'm at least not gonna listen to it here on my own blog. 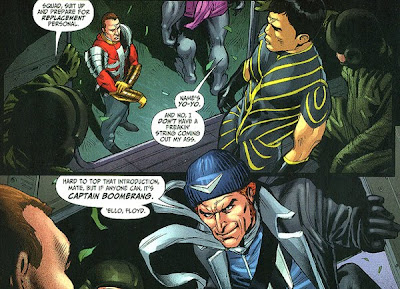