Au naturale with Poison Ivy another kind of jungle fever 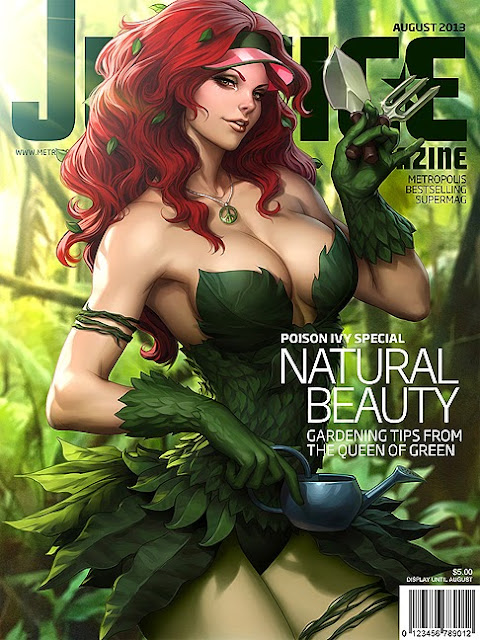 look what I just found on deviant art! I don't need to ramble about this your eyes pretty much tell you the whole story. But I want to mention how it does remind me of back in the original Suicide Squad #46 during their mission in Israel against Kobra (issues 45,46 and 47) when Poison Ivy had Count Vertigo for a while as her private pool side cabana boy toy. 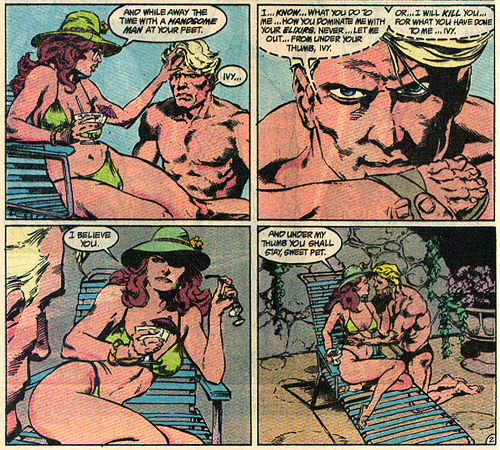 I can think of worse forms of subjugation. 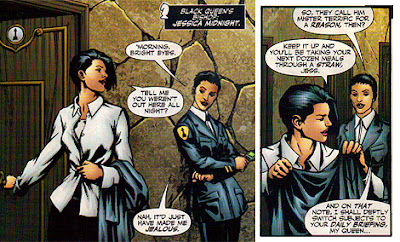 Hoping you all had a happy Hump Day.
Posted by Shlomo Ben Hungstien at 2:33 AM 7 comments:

Before you do anything else magnify the image so you can get a better look at it. Aside from that the posting title says it all. I think one of the most powerfully moving moments in the pages of the original Suicide Squad was when Waller had to inform Oracle that Flo Crawley was dead. The clip art to that scene along with just about every other with Oracle in the pages of the one and only Suicide Squad series can all be found on this one long page on Scan Daily enjoy! http://scans-daily.dreamwidth.org/3365277.html

Here's an update in regards to the upcoming Bronze Tiger appearance on Arrow: http://entertainment.inquirer.net/104323/bronze-tiger-brother-blood-coming-to-arrow
Posted by Shlomo Ben Hungstien at 12:00 AM 10 comments: 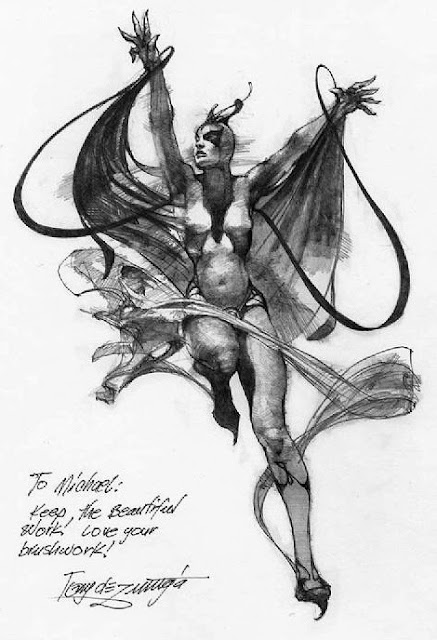 The minute I laid eyes on this fan art I thought of fantasy artist Frank Frazetta. And for those of you who know Frazetta's work (which should be all of you) that is some high praise for artist Tony de Zanuga who did this Black Orchid rendering. I've blogged about Black Orchid a couple of times here before with her having been one of the non convict members of the Squad who appeared in about a dozen issues in the original series. Certainly one of the more mysterious members of The Squad Black Orchid had some kind of arrangement with Waller for which in exchange for her services from time to time she was given a certain amount of access to Belle Reve's information resources: http://siskoid.blogspot.com/2011/03/task-force-x-retirement-files-020-023.html
But as of recently I remember where else we've seen her working with the Suicide Squad. She appeared in issue #1 of the original Deadshot mini-series along with Rick Flag, Waller and Flo Crowley. In that issue she's sent to save Deadshot who is in a free fall plunging to his death after having ruptured the fuselage of a plane filled with high level drug dealers he provoked a fire fight with. You see a little bit of that clip art in the Deadshot DC super villains Youtube video I featured a few postings back. And we've also seen her fighting along side other Squad members against the alien alliance in the INVASION mini series: http://siskoid.blogspot.com/2008/05/ambush-bug-cameos-invasion.html 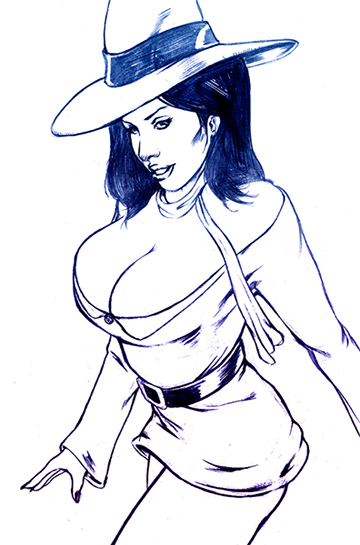 It happens to be the day after I originally published this posting that I stumbled upon this Enchantress fan art. As many of you know Enchantress was with the Squad from the very beginning up until the mid teens but would manifest herself here and there in various ways through out the series. I felt adding this fine piece of art would be a nice way to "augment" this posting. I'm definitely getting an Elvira kinda vibe from this. Along with quite bit of blood flow to my lower abdominal area, go figure.

One last thing, our favorite DC 52 Mystery Science Theater 3000 style reviewer covered Suicide Squad #23. I won't get a chance to thoroughly read it till later today but among other things there may be a possible Nightshade appearance: http://tessatechaitea.tumblr.com/post/55788387389/suicide-squad-22

Comic characters you got into from the animated movies & TV shows

Lately I've been really enjoying watching Owlman video clips from Crisis On Two Earths movie. As far as I can tell he's nothing like the rather offish and generally uninteresting Owlman (lame costume too) from what I remember of DC in the 80s. I like his sense of cynicism, his fatalistic attitude while always maintaining a calm  demeanor.
Then you've got Roy Harper from Young Justice and you all know how much I like him. Prior to Young Justice I knew very little about the Roy Harper character. I had only read a couple of early Suicide Squad issues he guest starred along with a Teen Titans one shot anti-drug issue that was given out as freebees at my elementary school back in the day when we still had dinosaurs. My knowledge of Cheshire was even more scant for that matter.
As for the Red Hood I had heard that name here and there with the travesty known as the New DC 52 never payed it any mind. That is until I happened upon some clips of Batman: Under The Red Hood on Youtube. Instantly I felt like I stumbled across a character I really felt like I could relate to. And that's not to say that there have not been other characters from animated films and TV shows that didn't strike a cord with me or that I otherwise really enjoy but the ones I mentioned here I just identify with on a more personable level. 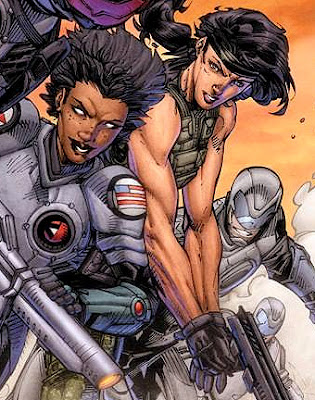 Hey Dale sorry I didn't really get back to you when you first posted this clip art on my face book page. But yes you were correct there is something very very Duchess like about her. Although I think the likeness is almost certainly coincidental, where is this from again? Some kind of Suicide Squad from the new 52 tie-in?
In the mean time let's take a trip down memory lane of one of those moments in awesome as Duchess a.k.a Lashina deliver some impromptu disciplinary measures in the field to Count Vertigo and Captain Boomerang who were attempting to carry out a little mutiny during a mission. Although we find out later she had ulterior motives. 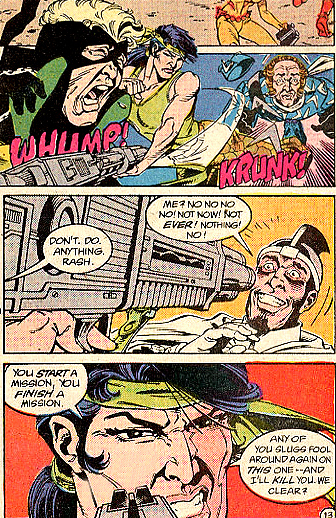 Posted by Shlomo Ben Hungstien at 12:00 AM 8 comments: 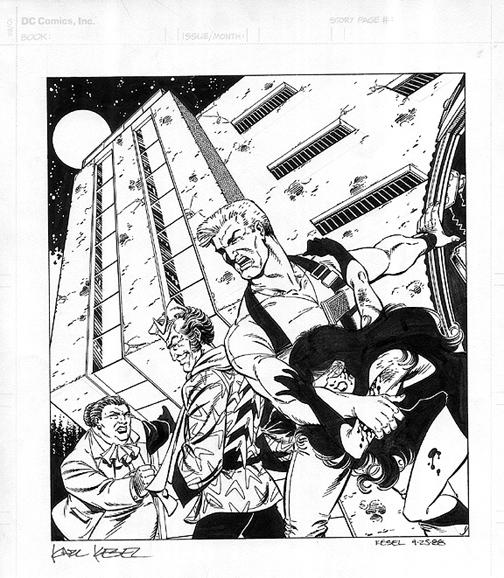 I came across this almost at random on some auction web site to raise money for John Ostrander in regards to glaucoma which is something he suffers from. Unfortunately I have no idea what the status of his condition is now but if someone else out there does please feel free to enlighten the rest of us. So art was done by no stranger to the Suicide Squad, Karl Kesel. In this case it was some sort of cover art for what is described as the Belle Reve source book http://paizo.com/products/btpy8mky?DC-Heroes-RPG-The-Belle-Reve-Sourcebook. I like it a lot it's a really well drawn piece especially with the dramatic perspective it gives the viewer. Notice how every one in it is in some state of distress except for ol Digger who's in his usual give a damn about the mission or anybody but himself kinda attitude? Even though I've never been into role playing games looking at this really miss the Squad of the old DCU.

Thanks for the heads up Dale about Ales Kot getting bumped from the Suicide Squad that was kinda interesting. Just think think folks, with every choice we make we literally create a new world in which history branches off into new realities. That means on another Earth in another universe there was no DC Reboot and in yet another the rebooted Suicide Squad looked very much like the Ostrander series. But on this Earth, I think my feelings about Kot and the Suicide Squad title can best be summed up but Owl Man's last line in this clip from Crisis On Two Earths: http://www.youtube.com/watch?v=G-rl0tfQO9E

Good memories of Saturday mornings with the 80s and Young Justice 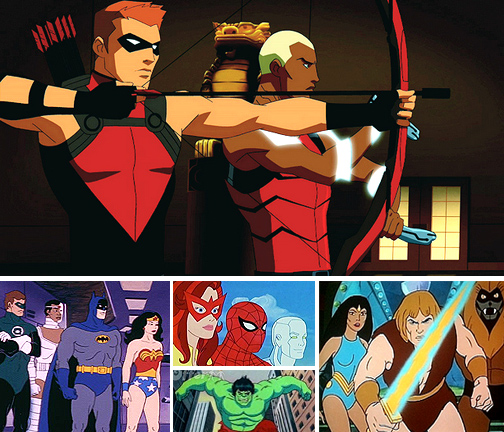 Oh I'm just feeling a little sentimental today. What a damn good show all around YJ between between the animation style, good writing and solid character development. Come to think of it I believe Young Justice is the first time since I was a kid did I find myself waking up to a Saturday morning cartoon. As far as Saturday mornings went hands down my absolute favorites were Spiderman & His Amazing Friends, The Incredible HULK, Super Powers (DC) and Thundar The Barbarian. And although the theme music for all of them was cool you just can't beat the one from Spiderman & His Amazing Friends.
Posted by Shlomo Ben Hungstien at 1:34 PM 9 comments: 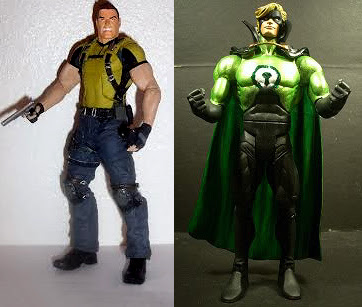 This posting started off with this really nice custom Rick Flag figure. Then I stumbled across this equally nice Count Vertigo one too.  And then I coincidentally found this staged scene photo of what I assume are factory made figures that I thought were also pretty cool. Deadshot, Deathstroke and Deadpool. Reminds me of the time I worked at a place that had one guy named Randy Graves and another named Randy Slaughter. 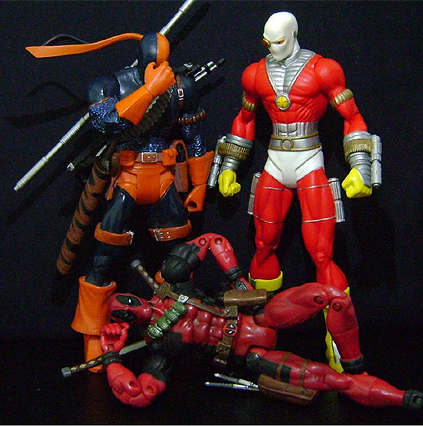 Just a little something I whipped up in photoshop as an after thought. 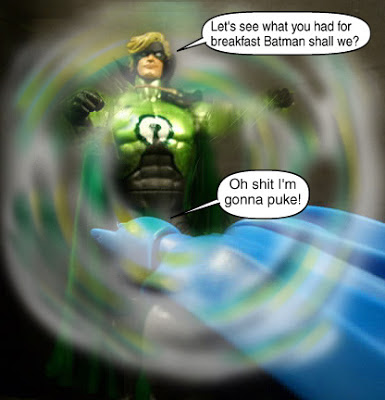