The best Bond according to Captain Boomerang

From the pages of Checkmate #16 (Vol.1). This scene is one of my favorite Boomerang moments from the old DCU. I can't help but wonder if it would have been written differently had the Pierce Brosnan and Daniel Craig Bond movies come along prior to this issue having been published (1989). At any rate I'm happy to share this with you all given that new comics these days give me very little to get excited over or blog about.

Judy Dench from James Bond Skyfall and The Wall 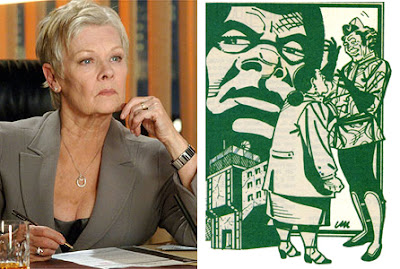 I just saw Skayfall today and I thought it was pretty good. I dunno if I'd say it was better then Casino Royale but it was certainly better then Quantum of Solace which I can't even remember what the plot was. Although I've been watching James Bond movies since I was a kid it just hit me today how much the "M" character reminded me of  The Wall. The parallels between the characters are so obvious I can't believe I didn't see it till now. They're both shrewd ball busters who have to keep tough guys who are hard cases in line for the sake of national security.

And speaking of tough women for those of you who have seen Skyfall, if the MI6 agent that was working with Bond through out the movie looked familiar to you it maybe because that was one of the survivors from 28 Days Later (great movie). Her name is Naomi Harris and she was starring opposite Killian Murphy as the character Selena. Good looking black woman with English accents turn me on something fierce I tell ya!

In case your wondering what happened to the Arrow/Count Vertigo posting I had before this one there was something about it that was causing problems with knew postings. Random text from the Arrow article was showing up in blocks on new postings for some reason. I've never encountered anything like that on Blogger before it was really fucken pissen me off! I tried different shit but in the end the only removing that posting seemed to work. Sorry to all of you who left comments but that posting had to go just like a body part with gangrene.

Next up, find out which James Bond was the best according to Captain Boomerang.
Posted by Shlomo Ben Hungstien at 5:41 PM 6 comments: 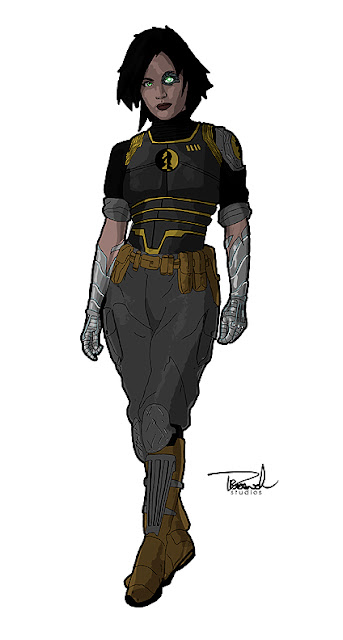 I just found this on Deviant Art tonight. Although I like the art work it's self I also liked what the artist had to say about the character. It's definitely discussion worthy just the type of stuff I love to find for this blog.

"WHO?!? You would ask. Former bodyguard to Bruce Wayne, turned Checkmate operative. Yeah, I went there. I dug through my old Bruce Wayne: Murderer issues and found her a compelling character. Probably cuz Greg Rucka was writing it. Maybe. But beyond those issues, she had her death faked and re-emerged as an agent of Checkmate, even the Black Queen. Who knew?

You know she could have been DC’s Maria Hill, if you think about it. A good counter to Amanda Waller and even now in the DCnU she could be Maxwell Lord’s right hand. Her backstory doesn’t have to change much, just some tweakin."
Posted by Shlomo Ben Hungstien at 10:28 PM 2 comments: 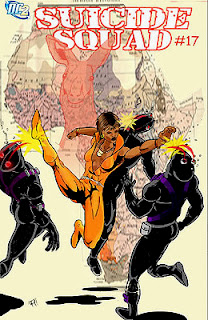 It's not like a blogger needs a good reason to post some nice fan art of Vixen. Now we all know Vixen was with the Suicide Squad for quite some time and had a long running "association" with Bronze Tiger for quite a while too. But I'm also hoping some of you haven't seen some of this art work I'm featuring here today.
Any thoughts who you'd want to see play Vixen if they ever made a live action movie with the character? I've heard Halle Berry's name being dropped and although she looks the part well I kinda can't shake that tragic Catwoman movie from some years back. On the other hand I'm kind thinking the tennis star Serena Williams would look insanely hot as Vixen. If you're not sure what she looks like Google her now. I really dig women with curves and some muscle on their frame. Just so damn hot!