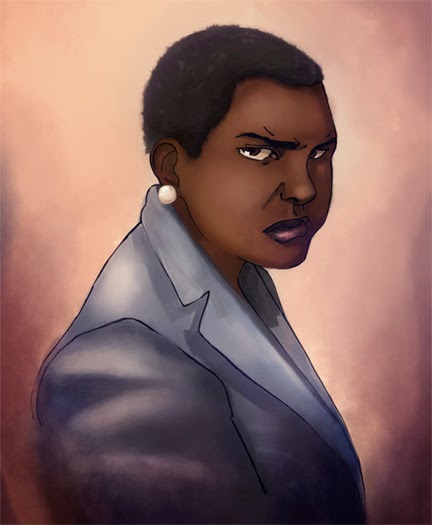 Just found this awesome piece by chance from an artist who also hates the skinny Waller and has stated that she refuses to ever draw her that way  . . .
http://the-unbrilliant.deviantart.com/gallery/
Also, you can see more fan art that's popped up this year for The Wall by doing an Amanda Waller key word search on deviant art. It's kinda funny you can always get an idea about how old someone is by finding out what turned em on to this character I've been coming across more and more people who discovered Waller from the Justice League Unlimited cartoon or from some kind of DC online gaming media. Suffice it to say those fans are usually much younger then the old school Waller fans who discovered her back during the Legends mini-series and the Ostrander Squad era.
Posted by Shlomo Ben Hungstien at 10:26 AM 7 comments:

Finally, John Ostrander speaks up about the rebooted Waller

"I don’t control what happens with Waller or where she goes or how she looks; she is owned by DC Entertainment and Warners. I knew that going in. She is their property. That said, I think the changes made in her appearance are misguided. There were and are reasons why she looked the way she did. I wanted her to seem formidable and visually unlike anyone else out there. Making her young and svelte and sexy loses that. She becomes more like everyone else. She lost part of what made her unique."

Special thanks to K.oT. for bringing this to my attention. For the the entire article
http://www.comicmix.com/columns/2014/03/16/john-ostrander-waller/#comment-180650
Posted by Shlomo Ben Hungstien at 7:26 AM 12 comments: