Adam West passes away at 88

Just heard the sad news (leukemia) a couple hours ago and I wanted to get a posting up this weekend with a little bit of my thoughts on West's career. As a kid I kinda used to like the original Batman TV show because like Spiderman on The Electric company it was one of the very few live action outlets available for some of my favorite comic book characters. As I got older I won't lie I did develop a certain degree of disdain for the show because of it's campyness although I certainly never felt that way for West himself who by all accounts has always been a stand up guy in his personal life.
I'm really glad that over the years he managed to in part rejuvenate his show biz career despite his type casting handicap with voice acting work on The Simpsons and The Family Guy. As some of you may remember he was also the voice actor in The Grey Ghost episode of the Batman animated series. That series brought a lot of critical acclaim and respect to the super hero genre and that episode in particular was certainly one of the best if not the best episode of the series. Ironically, West plays an out of work actor who can't couldn't find new acting gigs due to a type casting handicap but would go on to help Batman solve a series of crimes carried out by some psychotic fan boy using sophisticated remote controlled toys. 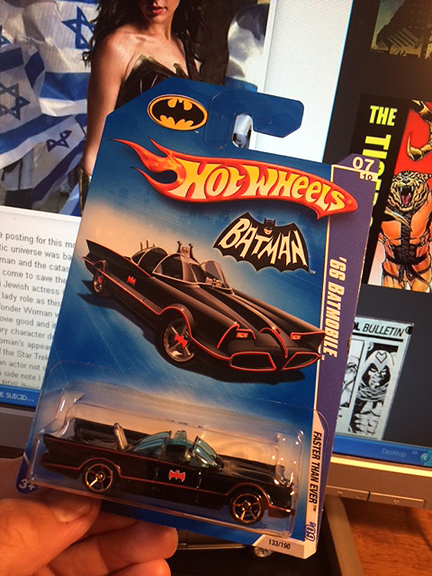 Ya know I have to admit even though I came to grow weary of the original Batman TV show I always maintained my fondness for the classic Batmobile from that series (I dug the Batboat to). I used to have the original die cast ones from Corgi but at least I still have a couple packaged ones from a Hotwheels release some 8 or 9 years ago which I saw in a Dollar store of all places. Looking back I should have picked up more of them. As a crime fighter you probably don't want to drive around seated in an open canopy (not much protection from gun fire) but that's ok it was such a cool design I still love it till this day.
Posted by Shlomo Ben Hungstien at 12:28 PM No comments:

My short and to the point Wonder Woman review 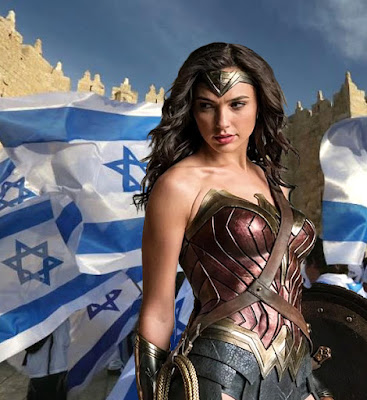 Ok here's your one posting for this month on what is largely an inactive blog site these days. Well DC's cinematic universe was badly in need of a hit after some what of a let down with Batman vs. Superman and the catastrophe that was the Suicide Squad. But I think Wonder Woman may have come to save the day as it were. And I must say it's a point of personal pride to see Israeli Jewish actress Gal Gadot (and former Israeli Defense Force soldier) deliver the leading lady role as this iconic character in her first solo film.
Gal Gadot is to Wonder Woman what Hugh Jackman is to Wolverine. That was a big part of what made this movie good and it had a great mix of non campy humor, ass kicking action and good secondary character development. I also like how they tied the beginning and the end to Wonder Woman's appearances in Batman vs. Superman. All that aside, as someone who is not a fan of the Star Trek reboot films (fuck you jj abrams) it was nice to see Chris Pine's talents as an actor not squandered on a shitty movie for a change.
On something of a side note I wanted to also mention that this movie has been under attack by the antisemitic BDS (boycott divest sanction) movement against Israel. Ofcourse this is because the film's leading lady is an Israeli Jew and former IDF soldier. The hezbolla controlled failed state shit hole known as lebanon banned the film. But I'm happy to say the movie never the less is cleaning up at the box office this weekend and has enjoyed very positive reviews by fan boys and regular audience goers alike. Knowing that Wonder Woman has become the latest BDS fail makes seeing it that much more satisfying.


NO RETREAT, NO SURRENDER. FOR SPARTA, FOR THEMYSCIRA.
Posted by Shlomo Ben Hungstien at 8:55 PM 6 comments: