I year for this blog today, time for a vacation 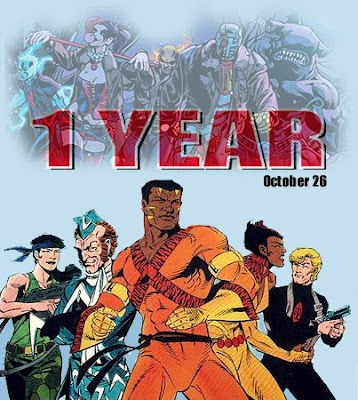 So as you guessed it this blog has finally hit it's one year milestone. But I'm pretty burnt out and I need a break from posting stuff cuz it actually takes a lot more time and energy then you think. I'll still be responding to comments and checking my email. In the mean time I'll at least update this posting with links to relevant Suicide Squad stuff going on out there that I happen to run into. X-Man's blog at the bottom of my blog role in the right hand column thus far has been doing good reviews of the monthly Suicide Squad issues from the 52 relaunch so you might want to check em out when new issues come out. 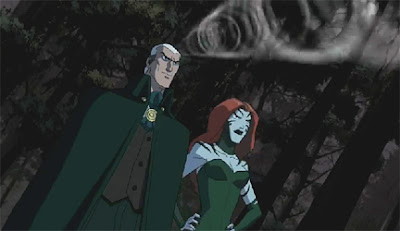 So here we have more good news for Suicide Squad fans. Poison Ivy (voiced by Alyssa Milano!) and Count Vertigo (voiced by Steve Blum) are featured in this episode (on Youtube now) as members of the Injustice League. On an interesting side note the Joker was voiced by Brent Spiner who was Data from Star Trek The Next Generation. His voice takes a little getting used to when compared to what we're used to with Mark Hammil but Spiner captures the maniacal psycho nature of the Joker perfectly.

Aside from all that it was an all around good episode this show really kicks ass. Also, I probably should have mentioned before that Amanda Waller from Young Justice was played by voice actor Sheryl Lee Ralph. Any body care to take a guess as to what Suicide Squad characters will appear next on this show? I'm guessing either Capt. Boomerang or Deadshot but I think Bronze Tiger or even Oracle (Barbara Gordon) are possibilities too.
Posted by Shlomo Ben Hungstien at 11:07 AM 7 comments:

Suicide Squad #2 review. Be warned I spoil everything!

Summery: The Squad is dropped into a football stadium that is in quarantine over the out break of some sort techno virus (think 28 Days Later meets the Borg). Their objective is to find someone among the spectators who has "The package" that they need to secure. They break up into two teams and search the area but are attacked along the way by all these cannibalistic tech zombies. It turns out "The package" is an infant still within the womb of what appears to be patient zero. Deadshot kills Voltaic (electrical powers) who just fried every last person in the stadium. Apparently unkown to Voltaic having him fry everyone in the stadium was how the virus was intended to be stopped under the pretense that some super powered villain went haywire so of course they're had to be a fall guy. The issue ends with The Squad having to make it to a new location for extraction with the baby. The only problem is they've all got bombs inside of them set to go off in 4 hours unless the bombs are neutralized before then just like in John Carpenter's Escape from New York.

What I thought: I thought it was pretty good the story moves at a good pace and there's no shortage of funny quips and antagonistic banter between the characters. Deadshot is the leader of the group and almost displays a "Rick Flag" kinda quality to him at times as ironic as that is. El Diablo (pyrokinetic) is the conscience of the group. Black Spider didn't really have much to do in this issue but he seems to be some sort of "ninja". King Shark is doing a lot of biting and Harley is Harley and get's to swing her hammer while getting off good one liners. Waller is kinda directing the mission from a control room via transmitter to Deadshot kinda like 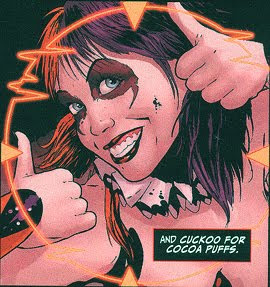 Misty Knight in Heroes for Hire. Oh and by the way it looks like Waller has also taken up smoking but please try not to have a mental breakdown over it people and no more whining about Harley's costume please! Also I would be negligent if I didn't mention how great the art is (as seen with this Harley panel) even though there's a handful of pages that seem to be done by a different artist.

What Else You Should Know: Although we don't get to see Checkmate we get confirmation that Checkmate is part of the DC relaunch universe so that's cool. Also, in the back of the issue there is some Q & A with Adam Glass (the writer) in which among other things he reveals that there will be familiar faces and organizations showing up in the pages of future Suicide Squad issues. Oh the possibilities huh?

Just like a boomerang mates he's back! Plus Amanda Waller's debut on Young Justice cartoon! 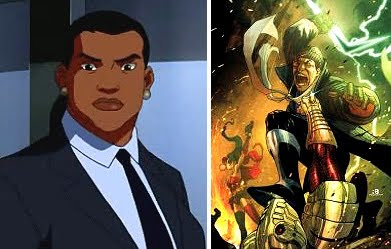 Apparently a new season of Young Justice must have started not too long ago! As if that isn't awesome enough as it is because I love Young Justice but the season opener guest stars Amanda Waller (a more feminized Waller) as the warden of Belle Reve. Two things, I'm not too sure what to make of the ending and as it turns out I've been pronouncing Belle Reve incorrectly for over 25 years now. Boy don't I feel special, anyways go to Youtube and paste in the word search Young Justice episode 11 part 1 "Terrors".

What your also looking at up there is the cover art for Suicide Squad #4, and here's the information that came with it, "The body count rises! Another Squad member falls -- but not the way you might expect! Betrayal follows betrayal as Captain Boomerang joins the Squad in a smash-and-grab against the terrorist organization Kobra, and Harley Quinn shows why you should never, ever recruit Squad members from Arkham Asylum. Brace yourself for a last-page shocker the likes of which the Squad has never faced before!"
Posted by Shlomo Ben Hungstien at 1:45 AM 7 comments:

Hot "suicide girls" cosplay & a pop quiz for all you hot shots out there! What's wrong with these panels?

There is something wrong with this scene. Unfortunately there's nothing I can really say about the clip art here that won't give it away or make it easy for you all to find the answer. The art work you see here is from an issue of Checkmate ( Vol. 1) during the aftermath of a major assault on Belle Reve prison (Task Force X HQ) during the Janus Directive. 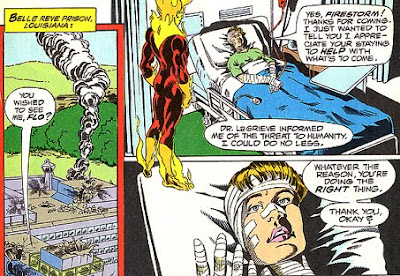 All I can say is that there is something out of place here in these panels. All I can say is that I hope Al Sharpton doesn't see it cause if so DC Comics might be getting a call from a NAACP lawyer. It's really easy to over look even for people who are familiar with the Suicide Squad comic book series from back in the day. I had this issue myself for quite a while before it hit me one day while browsing through it. I'll give you all a few days to figure it out. 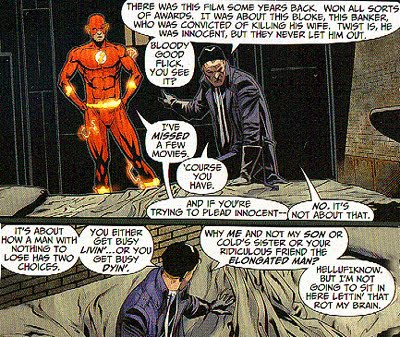 Okay mates since ya did such bang up job with the first trivia clip art here's another one I'm adding to this posting tonight. Which one o you droobs can tell me what movie Captain Boomerang is talkn about? It just so happens that I found this Brightest Day issue in a 3 for $1 box today in San Fran-bleedn-sisco.
Posted by Shlomo Ben Hungstien at 12:05 AM 12 comments: