So I was in LA this past weekend and found a really cool comic shop (Golden Apple Comics) where I picked up some Shadowpact back issues (1,2, 9 and 10) from their $1 discount back issue boxes. Between having some former Squad members (Nightshade and Enchantress of course) on the team and with my growing interest in Ragman I've been meaning to check out some Shadowpact stuff for a while now.
Those issues were a good read I'll be on the look out for more. Aside from just the all around good writing I liked the some what subtle Suicide Squad reference in issue 10. And on some what of a side note I went ahead and grabbed a copy of Checkmate 10 which guest starred Shadowpact. In that issue Checkmate enlists the aid of Shadowpact to counter act a magic based ritual process that Kobra uses to expose Checkmate and other government agencies infiltration attempts. . .
http://dc.wikia.com/wiki/Checkmate_Vol_2_10
Posted by Shlomo Ben Hungstien at 12:07 AM 5 comments:

Ragman and The Hayoth team up fan art 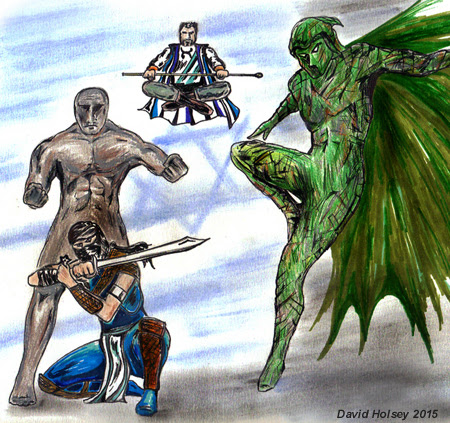 I've always been a fan of the Israeli meta human team know as The Hayoth who first appeared in the pages of The Suicide Squad and would later be seen in The Specter and Checkmate in the old DCU. But more recently I've been getting into the Ragman character since having read some stuff with him (Ragman Suite of Souls one shot and Day of Vengeance #1)  I've found in back issue discount boxes. DC has other Jewish superheros like Atom Smasher and Batgirl but what I liked about these particular characters is that their powers and identity as heroes centers around Jewish lore and mysticism. 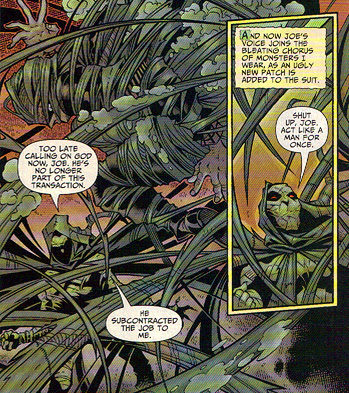 Oct. 3rd Update:
I decided to add this clip art of Ragman in action from Day of Vengeance #1 (2006). Something interesting I learned about Ragman's suit in this issue is that the new souls that are collected often try to resist helping Ragman when called upon. Kinda think of it as a new prison inmate who hasn't learned the rules yet and think they can act like they're still on the outside. Well we know how that eventually plays out.

Posted by Shlomo Ben Hungstien at 5:56 AM 3 comments: