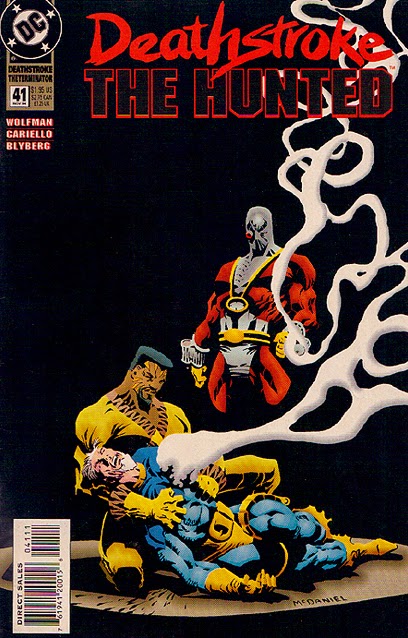 I went to a comic shop today for the first time I had never been to that I heard had a really big discount back issue collection. I found this for only 50 cents. Without knowing what issue it came from some years ago I featured some of the clip art from this action packed issue
http://suicidesquadtaskforcex.blogspot.com/search?q=deathstroke
With any luck I'll get a chance to read it by the of the weekend and get back to you all with what i thought of it. Same goes for the copy of Checkmate #1 (Vol. 1) which I also found for just 50 cents. I've talked a little bit about that issue in the past as well but I've never read it
http://suicidesquadtaskforcex.blogspot.com/2013/06/suicide-squad-32-1989-and-contemporary.html
I also found Suicide Squad Annual #1 which I used to have many many years ago but I ended up ditching it cuz quite frankly it kinda sucked. I'm hoping if I give it another read this time around I'll get something more out of it. Can't say the same for War of The Gods #3 which I found on the cheap at the Big WOW con last month. I used to have that one too and despite it's direct Suicide Squad tie-in it was as boring of a read now as it was back then. I actually talked about that here not that long ago
http://suicidesquadtaskforcex.blogspot.com/2014/02/conjugal-visits.html

Got a quick update here. I also picked up some more issues on the cheap from the JSA vs Kobra mini-series. Truth be told I've never been much of a JSA fan but in spite of that this series is pretty damn good and the art work is superb. It just acts as another reminder of how the DC relaunch sucks with crap like their Kobra knock off concept, Basilisk. Just writing that word acts like an irritant.
Posted by Shlomo Ben Hungstien at 10:19 PM 5 comments: