Bill Paxton passes away at 61 so to the grim reaper I say "Fuck you asshole!"

Unfucken believable! I literally only 30 moments ago just read the sad news about Bill Paxton having passed away during some sort of surgical procedure. Here we go again with yet another iconic actor from the sci-fi genre of the 80s passing away and we're not even done with February yet. Many people wouldn't know that his list of credits both in front and behind the camera is very extensive but I'm not going to get into a long winded posting about his fantastic career. But suffice it to say I loved Bill Paxton he's been in some great films both big and small that I've enjoyed since the mid 80s.
The land mark role that put him on the map no doubt was private Hudson from ALIENS but we actually saw Bill before that in a small part in the original classic Terminator film. Since then he's played in a number of great films like Tombstone, Apollo 13 and One False Move. He's also done some work on the small screen I remember him in particular most recently from Agents of S.H.I.E.L.D when that show was actually watchable. Bill was also in another great yet little known film that's one of my favorites from his acting resume. The movie is a modern day vampire film from the late 80s called Near Dark in which Paxton plays a psychotic vampire with an entertaining and twisted sense of humor when it comes to hunting his prey and taking on his enemies.

Gordon Henley from the original Star Wars (A New Hope) film and also most recently in Rogue 1 thanks to inserted footage never used from A New Hope died from a bizarre and tragic choking incident during a meal last month.

Let me just throw this in here real quick let's see if you can figure out the Star Wars reference here in this Battlestar Galactica comic book clip art from Dynamite Entertainment.

Posted by Shlomo Ben Hungstien at 10:45 AM 2 comments: 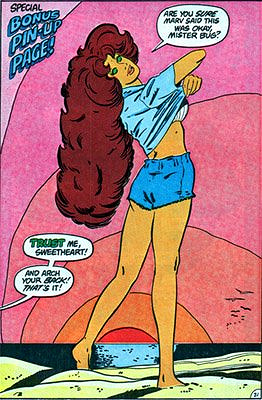 I remember when I first saw this Starfire bonus pin-up page back when I was a kid in the mid 80s. It was in the back pages of some issue of Ambush Bug (#2) which I was browsing at for reasons that I can't remember since I never had any interest in that character. I remember being so sprung at the time to see something like this in a comic book by a main stream publisher like DC.
But ofcourse by today's standards this is quite tame. Especially when you consider how the character has been re-imagined in the DCU reboot. At the time I was tempted to buy the issue just for that bonus pin-up page alone but just couldn't bring myself to paying the cover price for an issue of Ambush Bug. I've seen that same issue in $1 boxes a couple times recently but it's just as well to have found this Starfire bonus pin up online.
Posted by Shlomo Ben Hungstien at 8:12 PM 1 comment: