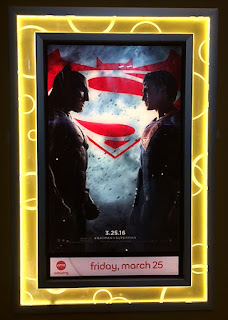 Just saw the movie Saturday night thanks to advanced tickets and reserved seating. So how was it? In a nut shell it was a very thoughtfully crafted film that did a good job on covering a lot of necessary points of development and continuity. But, it wasn't with out perhaps at least one glaring problem. Although I'm not sure the word "problem" quite fits here. First off, my biggest questions going into the film was Batman's brawl with Superman how exactly does he pull it off? And what about Jesse Eisenberg as a re-imagined Lex Luther?
Ben Affleck was superb as both Bruce Wayne and Batman, a truly worthy successor to Christian Bale's portrayal. And I'm happy to say although not the most original of concepts we do get a clear and plausible understanding of how Batman manages to go mano e mano against The Man of Steel with his exo-skeleton armor suite. When it comes to Eisenberg's Lex Luther I think he pulls that off pretty good. It's not quite the Lex Luther we're used to but it works even though his eccentric personality almost has a Joker quality to it. His scientific genius, government connections, capacity for cruelty, skills in manipulation and even his obvious education in classical literature are intact among other cornerstone Lex Luther character traits. If you liked Man of Steele (I certainly did!), which this movie is basically a sequel to then you'll enjoy all the returning cast members minus Jimmy Olsen who was absent in the movie.
The other big question was the Wonder Woman big screen debut. Although not given a whole lot in the way of dialogue Gal Gadot handles her role quite well as both a warrior and covert ops agent with almost a Catwoman like sense of stealth. We don't get to see the same kind of insight into her psyche as we do with Bruce Wayne and Clark Kent which was explored quite intensely in the film but I think the movie gives us just enough for now. And speaking of which, how exactly does Batman come to hate Superman so much to the point where he tries to take him out? A burning question for many especially for the more superficial fans who really only know these characters beyond the old school pop culture stand point as opposed to understanding them better as contemporary characters in all they're complexities. The movie delivers on that front to by the time these heroes have they're highly anticipated throw down you really understand how it came to this. And yes we do get to see other snippets of the future Justice Leaguers which are cleverly and other wise well woven into the movie's story line.
The Doomsday battle goes pretty much as expected and in some ways some managed to be a bit tedious and yet somehow rushed at the same time. But that's not to say it wasn't good or other wise not relevant to the plot especially since it acts as the common threat which brings all 3 heroes together. There are some logic gaps as is the case in most of these sorts of sci-fi Superhero movies. But I think the biggest over all "problem" the movie had was the somewhat slow pacing for the first half of the film. I do get it in part there was a lot to cover to be sure. And it's also important to remember that this movie is not only a Man of Steel sequel but it's also laying down most of the ground work for a Justice League film which no doubt will be even more action pact.
But that being said, a slightly shorter running time might have served the film better from a movie going experience stand point. Some people might have a problem with many of the bad guy deaths in the movie but I'm ok with it. It's fucken 2016 and if Batman feels like he has to put down some mercenary thug killer who's about to torch to death Martha Kent then yeah I'm cool with that. Not too sure how I feel about Metropolis and Gotham City being almost as close geographically as San Francsico and Oakland but I guess I'll get use to that. Overall pretty good I think I may enjoy it more with future viewings it has a lot going for which the human brain may not be able to fully absorb the first time around.

Posted by Shlomo Ben Hungstien at 9:10 AM 5 comments: 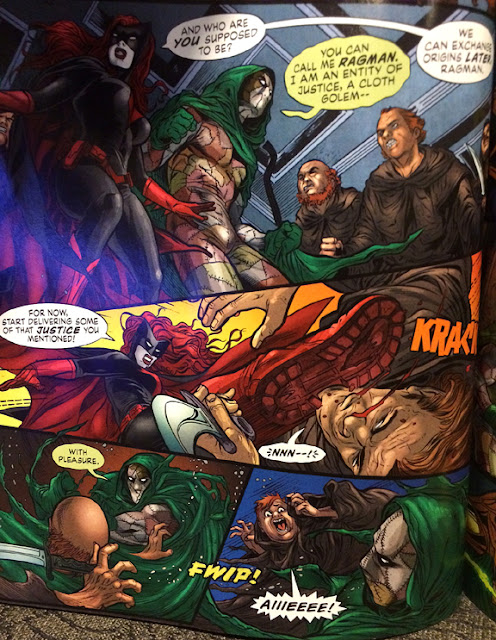 I was at the library yesterday when I happened to come across a Batwoman TPB which included #35 which was the issue that had Ragman on the cover. I remember when I first spotted that issue during a trip to Reno over the Thanksgiving Day weekend I was initially thinking to myself this might end up being the first new comic book I end up buying for the past few years. But after giving it a quick browse it wasn't quite what I was expecting or maybe just not what I was hoping for. That's not to say it didn't have anything good in it but it turned out not to be Ragman's first appearance in the NewDCU. Nor was it a good jumping on point to start reading the story arc and it didn't turn out to be some kind of Jewish superheros themed issue which I was kinda hoping for given that both Ragman and Batwoman are Jews.
With the whole "delivering justice" theme in this clip art it seems this is a good time to remind folks that Batman vs Superman: Dawn of Justice is not only 3 weeks away. That movie just seems to look better and better with each new promo for it. The wife and I were just discussing the whole advanced tickets thing. I really wanna see it on opening weekend like we did for Deadpool but damn who wants to deal with those crowds and lines? But did you know there's actually reserved seating at some theaters that are selling advanced tickets for those who are willing to pay a bit more? Oh decisions decisions. 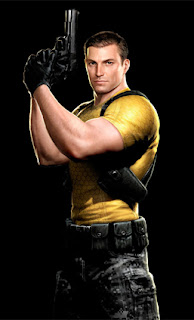 March 13th update:
Just found this cool rendering of the old DC Universe version of Rick Flag on Deviant Art this morning. The description under the art work is as follows . . . This is one of the Suicide Squad Illustrations that I did for the DC Films Presents-Dawn of the Justice League TV Special.

Looked into it and it can be easily found on youtube it's not bad. They have it in a five part video presentation hosted by Geoff Johns and Kevin Smith. And by the way Batman vs. Superman Dawn of Justice lees then two weeks away now.
Posted by Shlomo Ben Hungstien at 11:02 AM 2 comments: