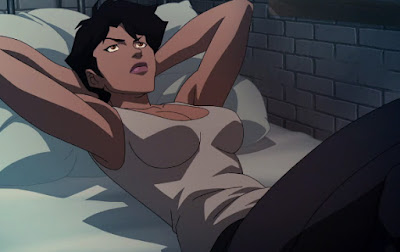 Yep that's actually a line in episode 1 of Vixen. Talk about an animated show with an edge! So apparently CW Seed isn't a TV cable channel it's some sort of CW network site. And the new Vixen series are actually just these 5 minute long mini episodes. So far 6 have been produced and depending how successful they are Vixen might become a live action show which I think would suck (pun intended) just like every other comic book based TV series out there. I say just make it a full length 30 minute episode animated series and leave it at that. Anyways, loved the first episode top notch writing and animation can't wait to see episode 2
http://www.cwseed.com/shows/vixen/episode-1/?play=f4cef08a-4fd7-4ab5-941a-b97e88800872
Posted by Shlomo Ben Hungstien at 12:58 AM 7 comments:

So this past weekend I was at a comic shop that had a discount back issue box (50 cents each or 5 for $2). I decided to go for the 5 issue deal which included this Ragman one shot issue. I enjoyed it so much I decided to write this posting even though it's not Suicide Squad related. The issue is basically an origin story about the Ragman suite as told from the perspective of the current Ragman (Rory Regan) who is grappling with conflicted feelings about his deceased father who happened to be the former Ragman.
But what exactly is the "Ragman"? Simply put, a council of Rabbis hundreds of years ago who had once created the mythical protector known as The Golem used a variation of those Golem spells to create a suite made from rags. But unlike the Golem which is just magically animated clay the suite would be worn by a person and hence forth have a soul and a conscience. The suite gives it's wearer increased strength, speed, agility, limited flight, partial invulnerability and a slowing of the aging process. It can also capture the souls of evil people which it's wearer can draw strength and knowledge from.

The former Ragman was a Jew who fought the nazis as Ragman in Poland during World War II and later immigrated to America where he retired the suite and changed his name in order to assimilate and start a new life. When it came to his son Rory he kept his Jewish heritage a secret until his mid teens. He was eventually murdered by gangsters who wanted to use his pawn shop as a drug dealing front. After Rory found the suite and took up the Ragman mantle he began to learn about his father's true origins which triggered a mix of feelings. On one hand he felt pride for his father's Ragman legacy but harbored feelings of resentment and confusing over his secrecy about his Jewish heritage. With the help of a local Rabbi Rory works through his feelings about his father and using the suite's abilities to communicate with captured souls he learns a deeper truth about his father's motivations and ultimately finds some peace of mind and closure. Preview the first few pages of the issue here . . . http://www.comicbookresources.com/?page=preview&id=6716
Posted by Shlomo Ben Hungstien at 12:03 AM 4 comments: