Well I just found out that issue 20 of the Suicide Squad which comes out May 8 will be debuting two new members to the Squad. Now I will tell you this, who they bring on board will either start to rebuild my confidence that this might actually be a title worth picking up again or it will further erode my interest in it. Is Ales Kot gonna start giving us some of the original Squad members or is it gonna be more of the same that we got with Glass? I don't think we can assume too much from the Cheetah at Belle Reve preview clip art just yet.
Also, are we ever gonna find out what the Hell King Shark is? Is he an experiment, a mutant or something supernatural? It was never a big issue to me but after 19 issues you think they could have let us in on the big secret there. Let me leave you all for now with another of my favorite moments in the Suicide Squad from the old DC Universe. 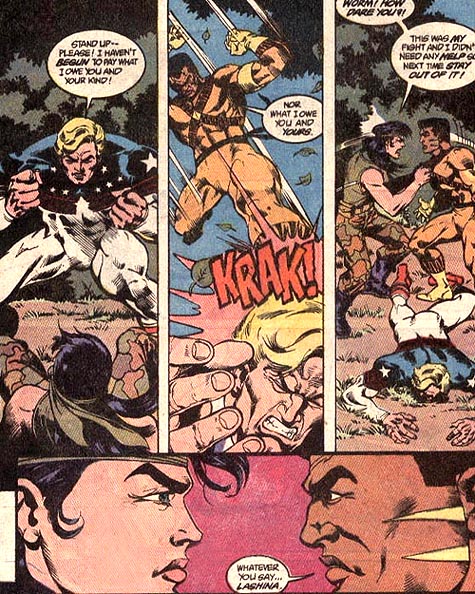 Posted by Shlomo Ben Hungstien at 1:45 AM 10 comments: 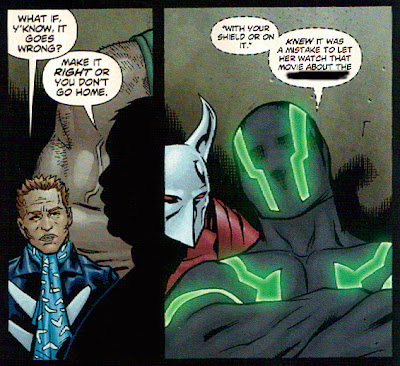 I had to black out the last word it would have given it away. So who's gonna be the first to get this one? Cmon you don't have to be as smart as Batman to figure this one out. Either way this clip art should provide you with another reminder of what made the Squad of the old DCU so fun to read. I hope the new writer for the Squad reboot is paying attention.

April 23 update (1 A.M. PT): Somebody just got the answer. But if you want to try and guess anyway . . . and then go into the comments section you can still tell us what you came up with rather it turned out to be the right answer or not.

Just posting this as a reminder that this week's Suicide Squad #19 was the last issue written by Adam Glass. I remember when I first announced I was dropping this series after #10 and how some of the readers of the title that were still hanging on urged me to stick with it for a while longer. Even Glass himself paid a visit to this blog and promised me that good things were just around the corner for this title and to hang in there.
And in a sense there was some truth to that with the reappearance of Captain Boomerang in issue #12. Well in case anybody hasn't noticed other then a flash back sequence in #16 we haven't seen Captain Boomerang since the opening pages of #14. That means Captain Boomerang has basically been absent in the pages of the Suicide Squad for the last 5 issues! WTF!? And true to form Glass's final issue ends on yet another uninspiring note of predictable or other wise uninteresting "plot twists" and banter between characters that I hardly care about anymore. See what I mean: http://tessatechaitea.blogspot.com/2013/04/suicide-squad-19.html

The new writer for the series Ales Kot has been quoted as saying "Alternately, we will build off the original, still magnificent Suicide Squad run by John Ostrander and Luke McDonnell and co. while also remembering what happened in the recent run and playing with the threads in a fashion that will be inviting to new readers and rewarding to those already on board. Simultaneously honoring the old and bringing in the new."

I sure hope so cuz Glass sure didn't go with that formula! He really seems to have had some kind of aversion to using old school Squad characters outside of Deadshot.

Posted by Shlomo Ben Hungstien at 7:45 AM 11 comments:

Posted by Shlomo Ben Hungstien at 1:34 AM 8 comments:

The Rogues vs The Secret 6 and other cool happenings

To see the full skit go to: http://dbsuniverse.blogspot.com/2013/04/so-who-would-win-rogues-vs-secret-six.html 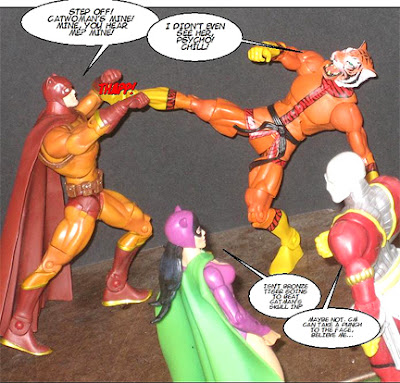 I'm updating this posting with this other action figure single panel skit I just found at http://random-happenstance.blogspot.com/


Let me add one more thing to this posting before I return this JLA (Ed Benes, Dwayne McDuffie,) trade paper back to the library I checked out a couple of weeks ago. I just can't let this book go with out saving one of my favorite panels from the issue that comes from this heart to heart moment between Mari and Ben from JLA#22.

No Kobra escapes the Manhunter

Former public defender turned bounty hunter Mark Shaw was a character that appeared through out the Ostrander Suicide Squad series. His appearances in the Suicide Squad usually coincided with DC Universe story lines that spanned several titles such as the late 80s Millennium and later in the Janus Directive. But he also has been in the pages of the Suicide Squad for internal story arcs as well such as when he helped the Squad take on a mission against the Japanese mob that was trying to obtain a huge cache of stolen Russian weapons known as The Dragon's Horde. But as seen in the above clip art it looks like some Suicide Squad related story lines crossed over into his title at one point such as The Phoenix Gambit which dealt with a brain washed Count Vertigo caught in a power struggle between Vlatavian nationals and the Russian government.

I'll admit I didn't know much about the character back when I was reading the Ostrander Squad series but I know that he was one of the non-super powered characters that had a variety of good skills and exotic weaponry. He was also one of the best martial arts fighters in the DC Universe having held his own against Rick Flag and eve managing to have kicked Kobra's ass. By the way DC relaunch and Adam Glass fuck you both with your lame Kobra knock off Regulas from Bassalisk. Let me leave you good people with a couple for links to some cool moments with Manhunter (with Rick Flag and Boomerang too) in the pages of the Ostrander Squad  http://random-happenstance.blogspot.com/search?q=Suicide+Squad+Annual+%231    as well as this cool video of the DC Universe Classic 6" figure  http://www.youtube.com/watch?v=u2pi3oOw50c
Posted by Shlomo Ben Hungstien at 12:00 PM 9 comments: 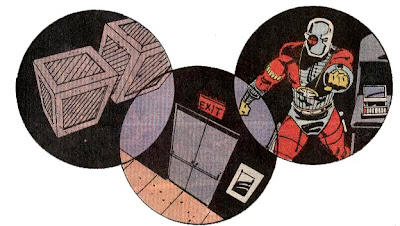 This trade doesn't come out till October but you don't have to wait that long to read much of it's contents. I went to the trouble of hunting down quite a bit of the clip art that's online for your viewing pleasure.


That clip art comes from Green Arrow # 2 (Volume 2) published in 1983. I gotta wonder if the writer had any idea how that bit of dialogue came off to most readers. Or possibly they did and had a fun laugh over it with the rest of the DC production staff? One of the many mysteries of life I suppose. Much like this nicely done Count Vertigo sketch who I couldn't find and artist's name to go with it. 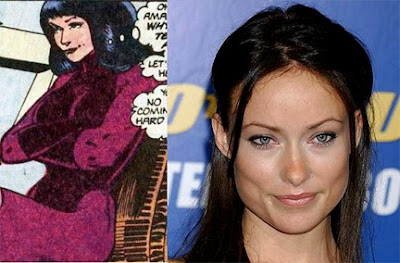 And speaking of family jewels, more specifically mine or yours if your a guy reading this posting right now. Here we have the insanely perfect looking Olivia Wilde as Nightshade. Just for the record Wilde would have been my first pick as Catwoman for Batman 3. Hathaway just did not work for me. 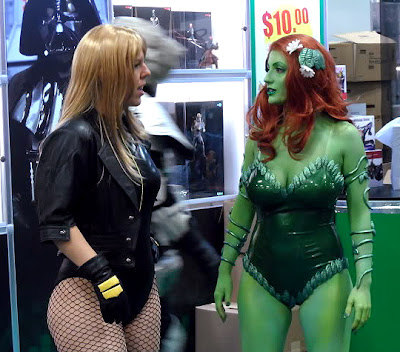 I've been reading a lot of Justice League from the Ed Benes era lately. Most of it has been coming from the trades paper backs I've been finding at the library lately. And I feel like I lucked out too cause they all covered the appearances of the Suicide Squad and cool related moments such as Vixen confiding to Bronze Tiger about her powers going haywire. So aside from the obvious along with Poison Ivy's long history on the Squad I was pretty happy when I came across this cosplay photo.

Posted by Shlomo Ben Hungstien at 12:00 AM 6 comments: