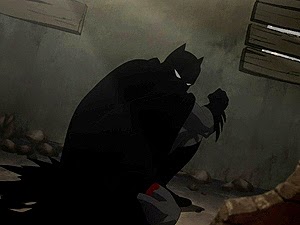 So by now most of you about my recent trip to Oregon. What I hadn't mentioned up until now is that aside from all the other stuff I did up there was that I also met up with one of my old high school buddies who had moved to Portland in 2002. We did a DC Universe movies DVD swap (long term loans). I just got done watching the Batman: Year One DVD and I have to say it was pretty good. It was just an all around good cop story and Batman story with all the bells and whistles that make so many DC animated movies top notch. I'll update this posting as soon as I watch Batman: Gotham Knight this weekend. In the mean time I've been hearing about this Suicide Squad movie that's in production if you wanna know my thoughts on it check this comment thread http://taskforce-x.blogspot.com/2014/11/suicide-squad-movie-news.html

Dec. 6th Update: So I just got around to watching the Gotham Knight DVD and it's actually 6 short movies instead of one long one. Of the 6 their were a couple of mediocre ones but the other 4 were pretty good even though the one that starred Deadshot features DS in one of the lamest costumes I'd ever seen.