Netanyahu's speech to the U.S. congress and how it speaks power to truth in the pages of the Suicide Squad, Checkmate & The Omac Project 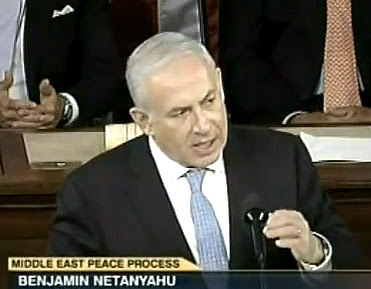 Israel's prime minister Benjamin Netanyahu just delivered rousing speech to the U.S. congress yesterday http://www.youtube.com/watch?v=PNnHArM2P9s&playnext=1&list=PL14874281775D93DAI I think it was one for the history books. In the speech he hit on a lot of truths that the propagators of anti-Western rhetoric both terrorists and terror enablers like the radical left would rather you not know. For those of you who are informed individuals you know this already but even in the DC Universe these truths are self evident. One of those truths Netanyahu spoke of is that there are over 1 million Arabs living as 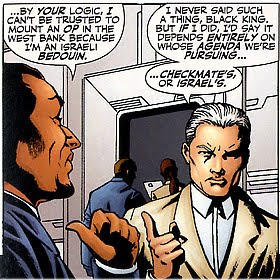 Israeli citizens who enjoy more freedoms and rights then the average Arab has in any Arab country. Checkmate's Black King is Taleb Khalidi, an Israeli Arab Bedouin who ascended to that position on the heels of an extensive education and professional career in Israel as an Israeli citizen. So much for that tired leftist mantra of Israel being an "apartheid state". Another point made was to remind people how close the and important the relations 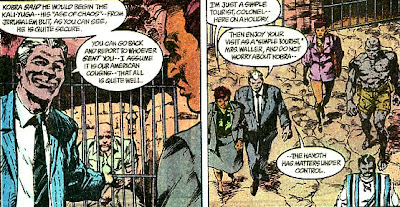 hip is between the U.S. and Israel. The Suicide Squad's first assignment in Israel involved thwarting the terrorist plans of Kobra which is basically like DC's version of hamas or al-qaeda. And just as Kobra is a mutual enemy of America and Israel the same is certainly so of hamas and al-qaeda in the real world. Netanyahu also mentioned in his speech how Israel is a strong country despite it's size and that it is quite capable of defending it's self with out the aid of American troops. This is also self evident for any one who knows the history of Israel's wars with the Arab world. And to all those leftist terror apologists out there who would attribute all of Israel's military accomplishments to American aid let me remind you that it takes much more then just weapons and money to win a war or an up hill battle. Otherwise America would have won in Vietnam, and our job in iraq and afganistan would have been done long ago. You fight with your head first, and then your fists. That's basic strategy in the art of war. Right click on the images to enlarge them for easier reading. 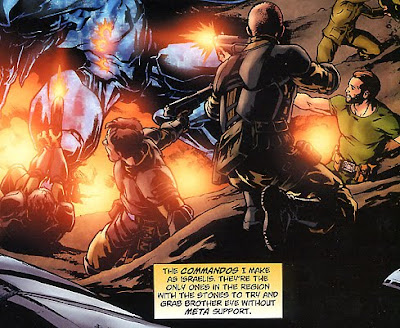 Email ThisBlogThis!Share to TwitterShare to FacebookShare to Pinterest
Labels: http://www.blogger.com/img/blank.gif 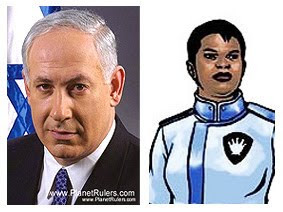 I don't know how many of you out there saw the press release that Israel's prime minister and Barack Obama gave yesterday. Or for that matter are familiar enough with the Israeli Arab conflict to understand the context of what was said. But if you did see it with a certain degree of understanding then you know that Netanyahu is basically a male version of Amanda Waller. Politically savvy, extremely intelligent, very direct and even shrewd when he needs to be. Qualities we don't see in our own president as consistently as many Americans would like to. This was extremely obvious when contrasting the portion of Obama's out look on the the realities on the ground in comparison to Netanyahu's. Although never the director of the Task Force X, Netanyahu is a former Israeli defense force commando who along with the Navy Seals are the most bad ass soldiers in the world. Rather with an uzi or a microphone, this man knows how to fight for his country's right to exist and defend it's self with out letting political correctness get in the way of reality.

DC's 52: Week Thirty -Three Task Force X vs. The Black Marvel Famliy. How to say the "F" word with out saying it in comic books.

What a great day I've had as far as comic book back issues goes. When I woke up today I set my mind this week to finding severl back issues I felt like I needed. From DC they were 52 Week Thirty -Thre 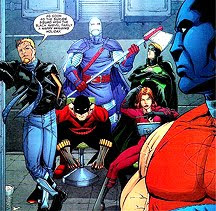 e and Checkmate #5 (Vol. 2). And from Marvel they were New Warriors (Vol. 1) #28, 73, 74 and 75. I can't friggin believe it I found Checkmate #5 on my lunch break and all the rest at another comic book shop on my way home from work. I love the dialogue in these panels that are to the left and on the bottom they really crack me up! Look how they keep using all those punctuation characters in place of the "F" bomb. Apparently all the fighting you see going on has to do with The Squad being sent to help Atom Smasher apprehend Black Adam and his family since they've become a problem to pretty much the whole world. It's really a shame what happened here to The Pursuader I was just starting to like this guy. It would have been nice to seem him in some further missions on The Squad especially if they were ever to take place in San Francisco but as you can see here he had to split. 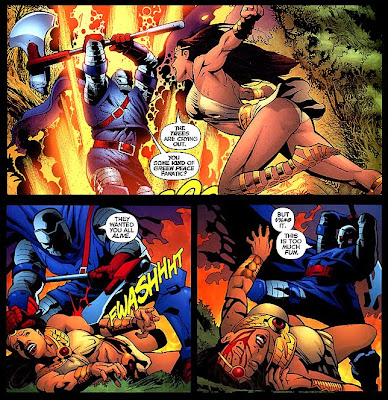 Now that's what I call a splash page! 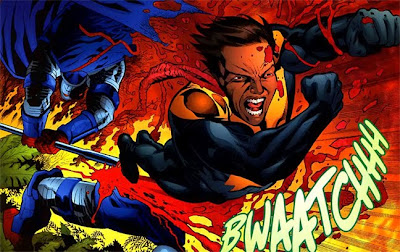 Suicide Squad fan art in all it's awe inspiring forms 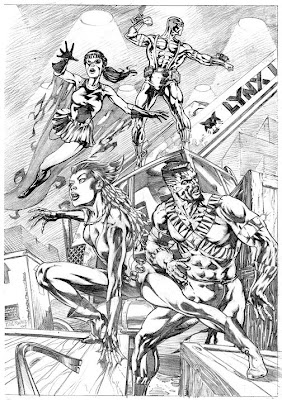 I found this gem to the left by Geof Isherwood on Comic Fans.com. This is absolute bad ass! It's so obvious what makes this such a great illustration I won't even go into my usual art speile. But at least make sure you magnify it to see the details.

Ya know when you think about it the concept of fan art doesn't always have to be about a drawing, painting or even some sort of digital illustration. Your body in a manner of speaking can be the "canvas" for your expression of fondness for the characters who have served with the Suicide Squad over the years. This awesome Deadshot costume and especially this Poison Ivy make up job just below are good examples of that. But I'd still like to see someone out there make the trench coat version of Deadshot's costume some day.
Ironically enough this week's Task Force X Retirement Files 044-047 includes Poison Ivy along with Oracle (Barbara Gordon), The Thinker (Cliff Carmichael) and The Outlaw John Henry: http://siskoid.blogspot.com/2011/05/suicide-squad-retirement-files-044-047.html

Posted by Shlomo Ben Hungstien at 12:02 AM 9 comments: 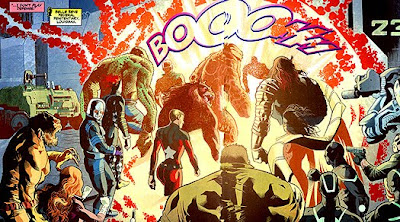 I'm guessing most of you out there probably know more about Operation Salvation Run then you do about the Checkmate (Vol. 2) three issue (18-20) story line known as the Fall of The Wall. But if you don't know about Salvation Run it was basically an unauthorized covert operation run by Amanda Waller and Rick Flag with the purpose of abducting meta human criminals and sending them to a prison planet. The clip art above is of a batch of criminals at Belle Reve being herded at gun point into a boom tube. This prison planet is basically the Gitmo of the DC Universe and just about as controversial which has caused Waller and Flag to bump heads with the JLA (#18) as well as certain elements in Checkmate. Not only that but Salvation Run was also what put Deadshot at odds with Waller and ultimately lead him to shooting her to even the score later on in the pages of Secret Six. If you want more detailed information about Salvation Run this is a nice little condensed synopsis: http://deadlygarden.blogspot.com/2009/08/salvation-run.html 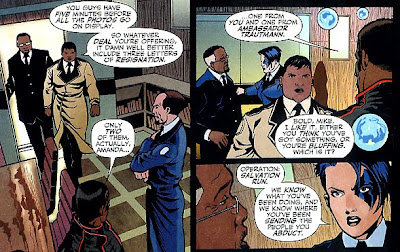 Personally I think it's a great idea and why I want Amanda Waller for president in 2012. But unfortunately despite holding the title of White Queen in Checkmate Waller had many political enemies (Mr.Terrific - White King, Taleb Khalid - Black King, Sasha Bordeaux - Black Queen) within the organization that were ready to throw anything at her they thought might stick. Aside from Salvation Run it was also discovered that Waller secretly carried Omac nano technology in her blood stream which technically made her a meta and that violated the "rule o 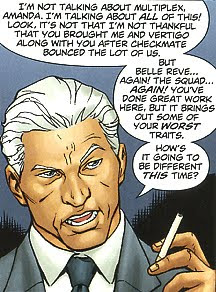 f two" policy at Checkmate. Basically it's a policy that puts a quota of meta-human agents within Checkmates dual command structure. So with all that she was forced to resign (along with her knight - Count Virtigo & bishop - King Faraday) as the White Queen of Checkmate. But that's ok. The Wall is never 100% out of "the game" in the world of politics and clandestine ops. She was still director of Task Force X and now had her former knight and bishop working for her there as seen in the 2008 Suicide Squad From the Ashes mini-series. But There's been no shortage of Amanda Waller in the DC Universe since then. She's been in numerous DC titles, the Justice League Unlimited (project Cadmus), Superman Batman: Public Enemies, Smallville and later this summer Amanda Waller makes her big screen debut in Green Lantern. But regardless of where ever she appears running whatever government agency she'll always be my queen.

Coming up next we feature some Suicide Squad Fan art for the first time in awhile!
Posted by Shlomo Ben Hungstien at 12:05 AM 6 comments: