The Vixen, the Tiger and the Wall 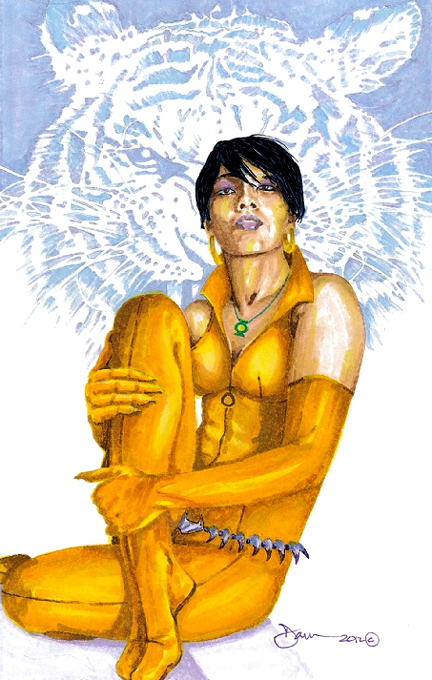 Here we have a nice piece that's described as mixed media as far as the medium goes by Darron J. Jackson. All obvious reasons aside as to what makes this piece really good I couldn't help but notice the Green Lantern insignia pendant she's wearing. I'm not sure if that's meant to be taken literally or more symbolically of her history and ties with the Justice League. As for the tiger ghost image in the back ground that's probably symbolic of her animal totem powers but I like to think it has a little something to do her unique and eternal connection (fuck your DC relaunch) to Ben Turner, Bronze Tiger.

It's always nice these days to come across some Suicide Squad related clip art from the old DCU that I've either never seen before or am otherwise not very familiar with. I'm not sure where this flash back clip art comes from but I bet I know who does.

Here's another great moment from the Ostrander Squad series (issue#41). Mari and Waller hunt down Ben after he's had a psychological break down thanks to the mind fucking "debriefing" by Sergeant Steel in an earlier issue. Just to help underscore what makes this scene so cool and what it says about John Ostrander's sense of social conscience the word "kaffir" is the South African equivalent of the infamous "N" word here.
Posted by Shlomo Ben Hungstien at 1:00 AM 8 comments:

Watch out for The Ayatollha Boomarang!

Between my two comic book related blogs I just feel so . . empty when it comes to this one right now. The Suicide Squad relaunch still sucks and this is the first Saturday where I don't have a new episode of Young Justice or Green Lantern to look forward too. I mean it's not like they didn't have re-runs before but you at least knew some where down the road new episodes were coming. And to add insult to injury have you noticed that cartoon network still keeps saying "all new episodes" when they do their YJ promo advertising?

So I'm really in need of s little something to boost my spirits and this scene with Captain Boomerang from Suicide Squad # 32 (1989) never ceases to amuse me. I love this clip art for two reasons, one because it's Boomerang at some of his best and two because I love to see my favorite writers make political commentaries that are inline with my views. Aside from Boomerang's antics in the heat of battle Ostrander is obviously offering his on views about iran's tyrannical ayatollhas and their religious fundamentalist polices.

Now I know there's no real substitute for now getting a weekly dose of a new ass kicking episode of Young Justice but this might ease your withdrawal symptoms a bit. This is a really well done video montage of some of the best Young Justice moments complimented by a really good sound track. I do hate most of those fan made music videos from TV shows but this one is an exception: http://www.youtube.com/watch?v=d36o32eZUyY
Posted by Shlomo Ben Hungstien at 11:39 AM 12 comments:

So I just got done watching End Game which supposedly is the last episode. I mean it definitely had a sense of finality to it but it was left open ended on several fronts too. The episode felt a bit rushed as far as the writing went but I still enjoyed it. Although I suspect OA1 probably has a difference of opinion on it then I do. Anyways, here's a pretty good and comprehensive (while not being too long) review of the episode which I agree with for the most part: http://www.youtube.com/watch?v=vhdl5xBQVGg
On a side note the Green Lantern episode Dark Matter ended on more of a note of finality. If that's the case I'll be sorry to see that one go unlike YJ I didn't much care for it at first but the writing eventually improved quite a bit. The show was good about not relying on it's primary caste like Hal Jordan and Kiliwog to carry the stories. As such they developed good secondary characters like Aya and Razor who were anything but two dimensional.

I came across this clip art that I liked from Arkham Unhinged #10. As you can see it's from a flash back sequence featuring The Suicide Squad although I can't friggin figured out if this is supposed to be from the old DCU or part of the reboot since this issue was published fairly recently. But it sure as Hell looks like the Ostrander Squad minus Copperhead. I dunno whatever but I can tell you the cover art features hands down the lamest version of Deadshot I've ever seen! I'm not fucken kidding it's so stupid I'm not going to even include it on this posting if you're not sure what I'm talking about just do a image Google search.
Posted by Shlomo Ben Hungstien at 6:02 PM 10 comments:

This was intended to be a comment on the last posting but after seeing how long winded it was I figured why not just make it into a new posting? Alright folks allow me to add a bit more of an objective review in contrast to OA1's "angry black man" (just messn with ya OA1 . . sort of) perspective on the show:

Sportsmaster vs Black Manta:
You have to remember something about Sportsmaster he trained both Artemis and Cheshire almost everything they know and he fought Deathstroke "mano e mano" to a stand still so to regard SM as some kind of second rate fighter is pretty ridiculous. plus don't forget his fight with Black Manta was basically a draw and SM had two advantages. One was the element of surprise and the other was Black Manta being distracted by his fear of Kaldor's life being in eminent danger by Cheshire.

Aqualad vs Black Manta:
We knew this showdown was coming. As Aqualad said he recognizes his father's noble side and that he was conflicted about being a double agent. But at the end of the day he was fully aware that they were on different sides in the war between good and evil and he did what he had to do as expected of a hero on the Young Justice team. I think Aqualad showed an amazing amount of poise, maturity and grace under pressure as a secret agent against The Light. To suggest the Aqualad character is some kind of "uncle Tom" or a chump is to me just down right irrational.

Character development on the show:
There's a lot of stuff most anybody who's familiar with the DC universe could potentially complain about here rather if it's about Wonder Girl or Ras Al Guhl on the show. I would have liked to have seen more Amanda Waller or maybe an episode that was in part devoted to the Suicide Squad like they had on Justice League Unlimited. But you know what guys? they can't have everything on this show for every single fan boy and girl out there, especially in just 3 seasons! Despite whatever things someone might want to nitpick on this show over all it's very well written and clearly aimed at a more mature audience thank friggin god!

In a nut shell when you consider the nauseating garbage we've gotten in recent years from DC like Batman: brave and bold and the pre-school level audience teen titans cartoons there's really next to nothing worth complaining about on YOUNG JUSTICE. Especially when you also consider the non DC stuff also in recent years that's been a great disappointment like the Thundercats revamp cartoon.
Posted by Shlomo Ben Hungstien at 11:10 AM 2 comments: 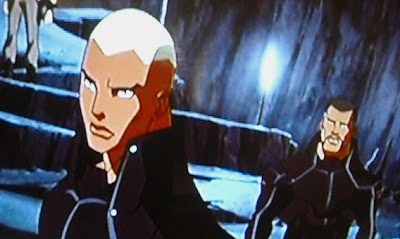 This weekend we saw another great episode and perhaps the beginning of this series wrapping up. With the alliance between The Reach and The Light falling apart and Aqualad and Artemis playing their final hand with their deep cover assignment I'm getting a sense this are coming to a conclusion. Cmon Omega Agent 1 ya gotta give it up for this one! That being said I can't help but wonder if last week's episode was the last we'll see of Arsenal with his new gang. I should hope not seeing as they just started their partnership at the end of that episode. There's still a few other issues to play out such as Black Beetle's ultimate plan now that he's ditched the Reach's ambassador and Vandal Savage escaping with the War World. Stay tuned folks this show keeps getting better and better with each weekend.

Just wanted to give a hat tip to Dale Bagwell  for passing this along to me. It seems the new creative team will be taking the Suicide Squad back to it's Ostrander roots. Too early to say if this is something worth getting excited for but you can read all about it here.
http://www.comicvine.com/news/interview-ales-kot-talks-suicide-squad-amanda-waller-and-characters-dying/146158/ 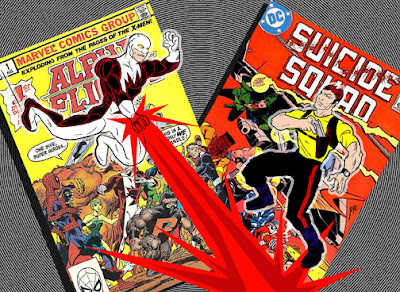 I'm just throwing this fan art in as an after thought today. This is quite an interesting Marvel vs DC match up. At a glance I'd be inclined to say that Alpha Flight has The Squad out done in the raw power department but that all really depends on which members of  The Squad make up the team that's going to go up against Alpha Flight. Through out the Squad's history in the old DCU they've had so many members come and go and many of them were some pretty ruthless and cunning killers. But also, The Squad does have Amanda Waller and we all know "don't ever fuck with The Wall".

More cool stuff just keeps falling into my lap today. Here's a little something I put together this Saturday afternoon after having learned about this IDF soldier. If you want to know more about Izzy's story go to this short Youtube video: http://www.youtube.com/watch?NR=1&feature=endscreen&v=c1D3nV1Bfy8

Posted by Shlomo Ben Hungstien at 9:38 AM 18 comments: