I came across this art work on Deviant Art recently that was described as New DC 52 Deadshot redesign. I thought it was cool at a glance but after looking at it a bit more carefully there was something familiar about it. And then it hit me the redesign is based on Blade's costume. Even the gun Deadshot is totting is an exact replica of Blade's. But it's all good I love the first Blade movie and this redesign is an obvious improvement from Deadshot's current look but I doubt DC would go for using it for obvious reason. I feel much the same way about The Squad reboot and DC in general as Blade did about vampires. 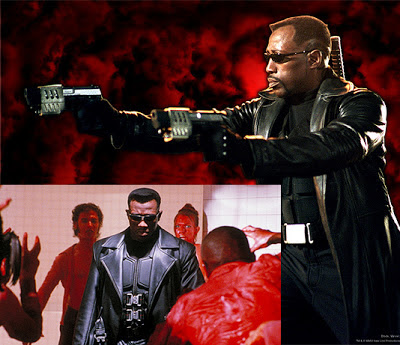 As if the rebooted Bronze Tiger wasn't bad enough . . . 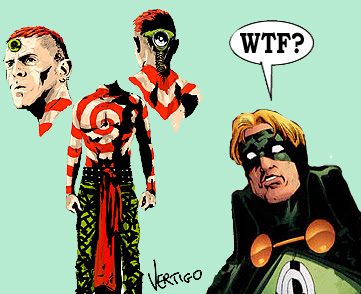 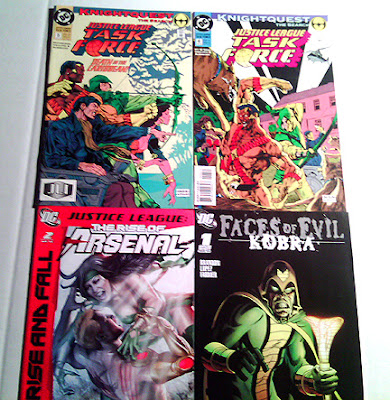 So what you're looking at is my DC Comics haul from the discount boxes. And as you can see I finally was able to find Justice League Task Force 5 and 6 featuring the REAL Bronze Tiger. For just a buck each but it gets even better. The Rise of Arsenal #3 (already have 1,3 and 4) and that KOBRA one shot for just 25 cents each! I haven't read that KOBRA one shot yet but at a glance it's full of action between the KOBRA cult and Checkmate and even has the JLA guest starring in it.

And what con would be complete with out some cosplay maidens? 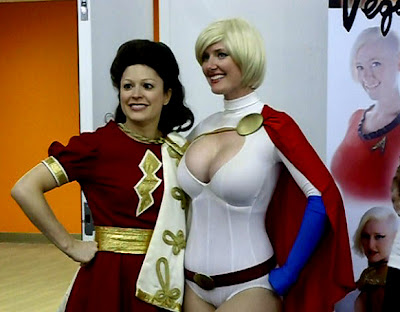 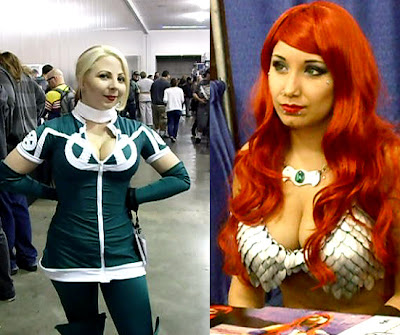 And there was even more cool stuff there but that part of it all I uploaded to Youtube for your viewing pleasure http://www.youtube.com/watch?v=OFlxl0ij-qE&feature=youtu.be

John Ostrander from "another life time ago" 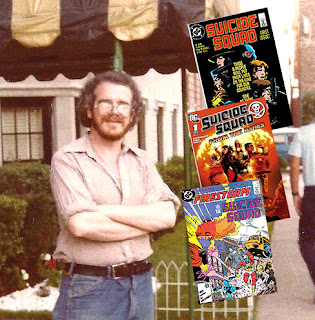 I found this early photo of the man John Suicide Squad Ostrander on his Facebook page. As far as how old he was in this photo he just describes it as being another life time ago. Unfortunately his Suicide Squad feels like it was from another life time ago too.
It's ironic that I miss the Rom spaceknight character because he can't be published by Marvel for legal reasons but at the same time Ostrander's Suicide Squad (which is the real one!) feels every bit as much out of reach as far as ever reading again as newly published work I'd be happy to purchase. It should also be noted that I think Greg Rucka could probably do a rebooted Suicide Squad justice as well. Maybe even Gail Simone for that matter. By the way speaking of Rucka I just found according to his Wikipedia page he was born in San Francisco which is just across the Bay from me. You can fined him on Facebook as well just in case you were wondering.
Posted by Shlomo Ben Hungstien at 12:05 PM 3 comments: 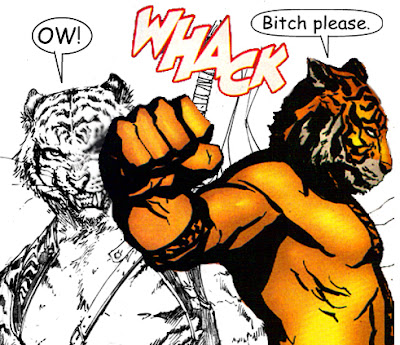 As I was lamenting the continued travesty of the new DCU and what they have been doing with all Suicide Squad related stuff I had an epiphany about how they came up with the brilliant idea (I'm being so fucken sarcastic) to make Ben Turner into some kind of reject from The Island of Dr. Moreau. Somebody at DC must have been watching the original Thundercats one day and it had occurred to him that the Panthro character was voiced by a black actor. That in turn probably made him think about how BT is a black character and that BT's time in the New DCU has finally come. . .sort of. And before you know it we now have the latest dumbass move by the powers that be at DC.

As irony would have it if you recall Ben Turner squared off with a cat man martial artist kinda hybrid character back in the original Suicide Squad during The Dragon's Horde story line. You all remember right? That was back when reading a comic book with the title Suicide Squad was enjoyable. When it comes to the old DCU vs the New DCU remember to always bet on black. And you can take that to the bank . . the blood bank.

A refreshing taste of the old DCU from down under 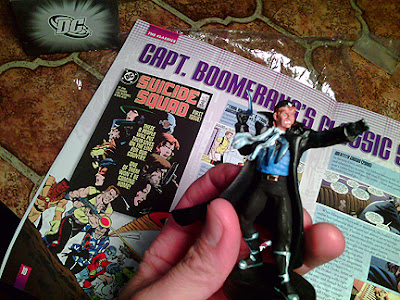 I just made a nice little score yesterday of some old school Suicide Squad nostalgia. When photos alone won't do . . . http://www.youtube.com/watch?v=GTPoLV7s96c 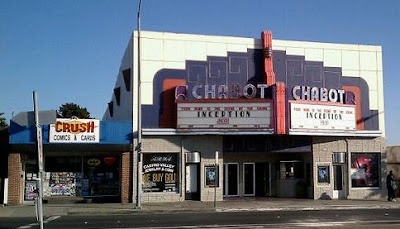 Here's my local comic shop where I found the Captain Boomerang statue right after I left the theater from seeing Iron Man III. Convenient huh?
Posted by Shlomo Ben Hungstien at 12:02 AM 9 comments:


I was browsing issue #20 at my local comic shop today and if you haven't been happy with this series so far there isn't anything in this issue to make you feel better I'm afraid. I'm really not too clear who the 2 new members are supposed to be and the story pretty much consisted of Waller and her new right hand man The Unknown Soldier brutalizing (yaaawn) and playing more mind games (zzzzzzzz) with the rest of the Squad. Somebody please wake me when it's over.
After more then a year and a half of disappointment I needed this issue to come out with guns blazing in the direction I've been wanting this series to go in. Despite two new characters being added to the roster, still no Bronze Tiger, no Nightshade, no Vertigo, no Rick Flag or even a return of Captain Boomerang into the story line.
It just seems like DC is just Hell bent on selling a Suicide Squad to the readers that looks next to nothing like the Squad of the old DCU. I'd say I was done with the Suicide Squad reboot but that's been the case for almost a year now. Issue 20 just might have been the first stone to pave my way back to actually buying this book again but that didn't turn out to be the case. I recommend you spare yourself more disappointment and save your $3 for a more worth while cause like helping out the Boston Marathon bombing victims: https://secure.onefundboston.org/page/contribute/default

5/9 Update: Ya know I really think at this point DC is just trying to find all sorts of ways to fuck over the Ostrander/McDonnel Squad as much as possible. I just found out DC is finally introducing a rebooted Bronze Tiger but as a "Thundercat".  Just go here to see the travesty of which I speak: http://thebronzetiger.blogspot.com/2013/05/defamation-of-character.html

Free Comic Book Day was a bust. I didn't see anything that was of any interest to me all the free comics were crap and they were using the back issue bin area for more space so I wasn't able to do my usual foraging there for cool old school shit. Oh well, at least I have some newly found fan art which this blog has been devoid of for a little while now. First up is some classic Nightshade by Brendon Fraim. 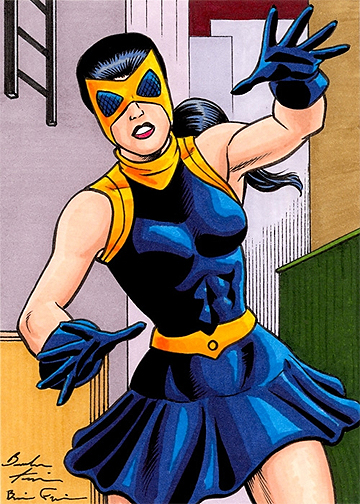 Did you know that Nightshade, Peacemaker, Sergeant Steele, Blue Beetle, Judo Master, Captain Atom and The Question were all originally characters from another publishing company that no longer exists called Charlton Comics? Most of you probably did know that already but for the few who don't I thought you might have found that interesting. DC at some point bought the rights to the characters and integrated them into the DC Universe.
Nightshade pretty much became synonymous with both Captain Atom (the DC title of course) and The Suicide Squad. Peacemaker and Sergeant Steele made multiple appearances in both the Suicide Squad and Checkmate (both volumes). So I'm diggin Peacemaker re-design concept but I'm also looking to get some feed back on it from you good people. If you need a quick reference to his costume design as it was in the old DCU: http://suicidesquadtaskforcex.blogspot.com/2012/06/impel-trading-cards-series-task-force-x_21.html 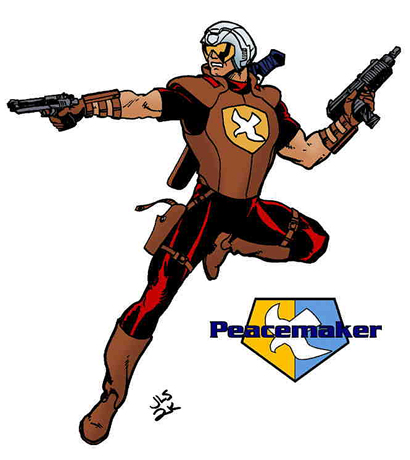 Mad as a Harriet at Belle Reve

Just thought I'd kick off May with another one of my favorite moments from some old school Suicide Squad. Specifically this one comes from issue #3 in which Darksied sends the Female Furies to spring Gordon Godfrey in this LEGENDS after math kinda story line. Prior to this issue my familiarity with the Furies was vague and I certainly had no idea how bad ass they were!
By the way welcome back Aliera. I hear ya about feeling so "disconnected" from the current series I think you have been wise to save your money. I don't even wanna think about what you guys pay for new comics in Portugal.
Posted by Shlomo Ben Hungstien at 9:57 AM 2 comments: