I recently grabbed issue 38 of The Vigilante (1987) out of a 3 for $1 box it seemed like it would make for a fun read. In this issue these two Checkmate affiliated characters* team up to take on a docked freighter ship full of Middle East terrorists. Unfortunately toward the end of the issue they ended up turning on each other over who gets to kill one of the top priority targets and as expected that fight ended in a stalemate. Over all it wasn't bad, certainly worth what I paid for it I hope you enjoy the clip art I posted.

* Peacemaker made multiple appearances in the The Suicide Squad series during the Janus Directive story line https://suicidesquadtaskforcex.blogspot.com/search?q=duchess

Posted by Shlomo Ben Hungstien at 3:17 AM 4 comments:


Gal Gadot's $820 million world wide block busterWonder Woman has become one of the biggest BDS (the anti-Semitic boycott, divestment and sanction movement against Israel) fails of all time. Her next appearance as Wonder Woman in The Justice League next month is guaranteed to be another massive commercial success. SNL has had something of a sketchy record for episodes that don't suck vs ones that do but Gal hosting tonight's episode in and of it's self should make it worth watching. 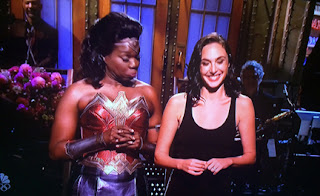 I just got done watching the episode and it was great! Gal Gadot did part of the monologue in Hebrew and according to her this was the first SNL episode broad cast live in Israel. Also, I can honestly saw most of the skits (both with and with out Gal) were funny especially the one with Gal on a date with O.J. Simpson. Hosting SNL is always a milestone for any up and coming celebrity so we can consider tonight yet another BDS fail. Jew haters every where who have tried to defame her would love nothing more then to see Gal Gadot be discredited as a role model for woman and see her career go down the drain.


A funny socio-politically charged moment between Amanda Waller and then president Ronald Reagan from the pages of Secret Origins issue 14 (1987). Can you just imagine what Amanda Waller would think about donald trump? 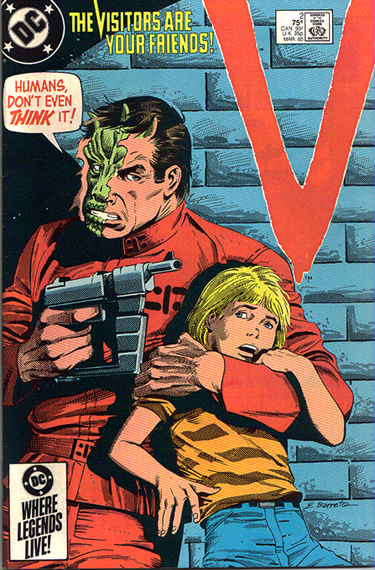 Just throwing this out there for the Hell of it. Anybody remember this DC Comics series based on the mini-series hit TV show from the mid 80s? V taught us that fascism isn't just a human concept, not by a long shot.
Posted by Shlomo Ben Hungstien at 8:21 AM 2 comments: