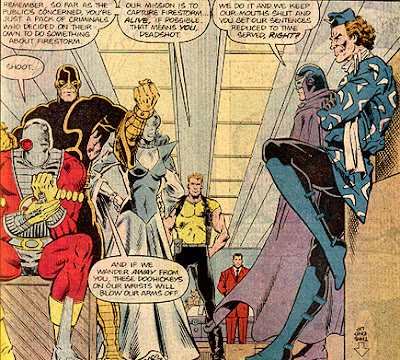 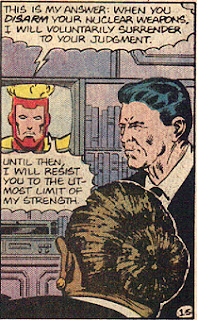 Ya know with all this shit going on with north korea and their nuclear program not to mention renewed tensions with russia and the threat of islamic terrorists trying to get their filthy hands on that shit for years now it got me thinking about Firestorm 64 written by John Ostrander. The issue came out in 1987 in which the Cold War was still going on here in the real world even though it would be only a few years later that the soviet union would collapse. For about the next two decades or so we really didn't think about nuclear war as something that we had to worry about any more.
So this issue was part of a story arc in which Ronald and professor Stein (who was dying of a brain tumor at the time) as Firestorm attempted to coerce the nuclear armed nations of the world into dismantling their nuclear arsenals under the threat of doing it for them if they didn't comply. A some what similar premise to the awful Superman 4 film which ironically also came out in 1987. Yeah that didn't go over to well and as a result Firestorm was declared an outlaw and become subject to arrest. As a result Captain Atom (prior to this issue), Task Force X, The Justice League mixed it up with Firestorm in an attempt to end his crusade.
The story line continues and comes to a head in Firestorm annual 2 in which The Squad and The League start to fight each other. Adding to the mayhem The Parasite who at the time was in The Squad goes rogue. Firestorm manages to deal with The Parasite and make his escape only to be confronted in the Nevada desert by a russian super powered agent named Pozhar. The show down happens shortly before professor Stein's tumor finally kills him and disrupts the Firestorm bond in the process which happens only seconds before both the U.S. and Soviet governments try to nuke both combatants. Good stuff, makes me miss the 80s all that much more. 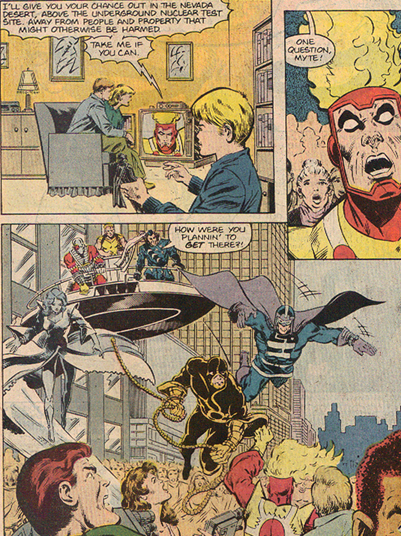