Suicide Squad #8, I got your cover art solicitation right here! Awesome doesn't even begin to describe it.

“The Hunt for Harley Quinn” aftermath! As the surviving Squad members attempt to recover from their disastrous Gotham City mission, we learn a dark secret that has been festering in the team since issue #1: a traitor stalks the Suicide Squad! The saboteur’s mission: Assassinate Amanda Waller, expose the Squad and leave Task Force X in ruins! The fuse is lit to the first great mystery of 2012: Who is the Suicide Assassin? 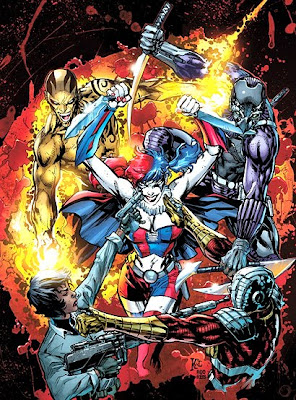 This is hands down one of the coolest covers I've ever seen and certainly the best one this year so far. It really captures the whole feel of what the Suicide Squad is really all about. Notice how the scene is laid out in a circle pattern as if to suggest all the mistrust, betrayal, instability, mutual loathing and yet interdependency is what keeps it together even though it's the very same thing that threatens to tear it apart. All of which is a situation that keeps going round and round, hence the circle. Then there's the blood. It's all around them and in fact they almost seem to be emerging from it. It's just an all around beautiful cover from the stand point of being artistic with the metaphoric references as well as visually dynamic. 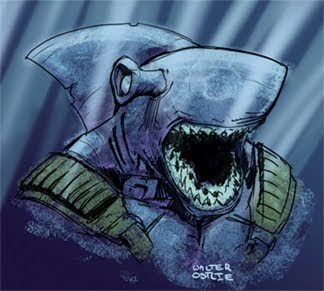 King Shark may not be featured on the cover of Suicide Squad #8 but at least I found some of this cool fan art of the DC relaunch hammerhead version of him. As far as I know this is a first of it's kind since all the other King Shark fan art I ever come across is of him as a great white. I also think this is the first fan art I've seen from the Suicide Squad relaunch that wasn't Harley Quinn related. This rendering (done from start to finish in photoshop) is by talented illustrator Walter Ostile. As you can see he has a very distinctive style which in and of it's self goes a long way to making your mark in the art world. If you want to see more of his work go to: http://walterostlie.blogspot.com/
Posted by Shlomo Ben Hungstien at 12:03 AM