I like this, Bronze Tiger has almost a Bruce Lee kinda vibe going on here.

Just a heads up, there's a ton of 2017 Comic-Con videos containing panels of just about every up coming sci-fi/comic book movie and TV series both on cable and NetFlix this year. It's astonishing how many big time A list celebrities are at this event in San Diego now. Back when I went in 1994 it was pretty big but nothing like it is now. A Hell of a lot easier and cheaper to get into back then as well, now it's almost like you gotta know somebody on the inside in order to get into the con. 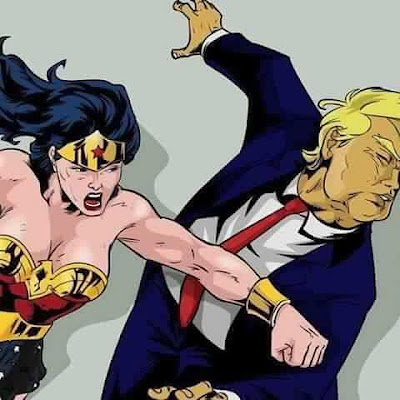 By the way have I ever mentioned here how much I fucken hate donald trump? Big thanks to Calvin's Canadian Cave of Cool which is where I found this funny ass cartoon . . .
http://calvinscanadiancaveofcool.blogspot.com/
Posted by Shlomo Ben Hungstien at 12:40 AM