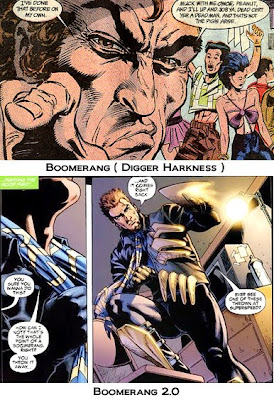 In the 2007-2008 Suicide Squad 9 issue mini series we find out that the immortal legend from down under has become the dearly departed. However, virtually no details were given at the time. I finally decided to research the mysterious circumstances leading up to the death of the original Captain Boomerang. Turns out he got himself killed in some botched assassination attempt during a series called the Identity Crisis. Although I'll be the first to admit that this is one character that was in desperate need of a make over visually, ya just couldn't beat that "Ausse" dialect that made him harder to understand then Benecio Del Torro (Mr. Fenster) from "The Usual Suspects" http://www.youtube.com/watch?v=Hj5vERbLtYI
But I tell ya Capt. Boomerang made for some fun reading between all that Australian slang and his all around annoying personality he was one of the things that made The Suicide Squad a fun read.
I wish we new more about his son however. He does have a cool new look and with his super speed power ( is he a mutant? ) he's no doubt a more formidable fighter then his old man ever was. But alas, we are forever deprived of that wonderful accent so I guess well just have to enjoy the further adventures of Capt. Boomerang with him talking like the rest of us Americans ( how boring!). So let's crack open a Fosters ( Australian for beer) on behalf o that bleedn dingo the original Capt. Boomerang. Rest in peace, cheers mate.
For your viewing pleasure here's a Justice League episode ( Task Force X) featuring Rick Flag, Deadshot, Plastique, Clock King and none other then the original Capt. Boomerang: http://www.youtube.com/watch?v=ymDVBXeZGMs
Posted by Shlomo Ben Hungstien at 2:22 AM