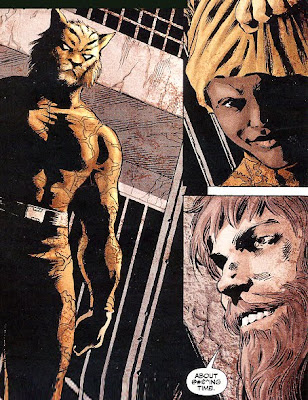 Over the years I've enjoyed watching the friendship between these two evolve. It started basically as Bronze Tiger usually being the only guy on missions that Rick Flag could trust, to them having a real sense of loyalty and respect for each other. In the pages of Checkmate we saw this loyalty being put to the test when Bronze Tiger travels to some asian crap hole of a jail and beats the shit out of the guards and rescues Rick from what had already been a friggin 3 year stay in prison! Before long they were begrudging 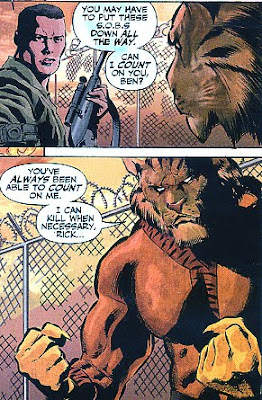 ly off on another dangerous mission on behalf of now Checkmate's White Queen, Amanda Waller. Later after the mission is completed Waller finds them in a bar together having a drink like a couple of regular "Joe six packs" Sarah Palin used to talk about on the presidential campaign trail back in 2008.
These two have a lot in common so this all doesn't come as a big surprise. Along with Batman these guys are the best in hand to hand combat in the DC Universe. Both have been brain washed in the past and are 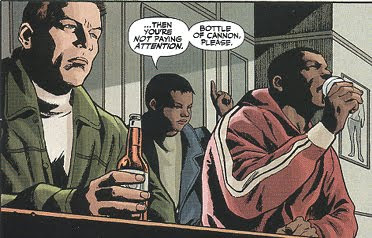 still struggling to come to terms with that. And they both have emotional issues that act like a better defense mechanism then their martial arts skills. Just ask Nightshade and The Vixen. Now I'm not suggesting that there is anything "broke back' about their friendship but here are a couple of guys who maybe at times should think beyond this "band of bros. before hoes" mentality. Given a choice between going on a dangerous mission along with criminal scum or spending the night at Vixen's place who is a JLA member that happens to moonlight as an international super model should be a no brainer even if that brain has been washed at some point. I mean here are two noble tough guys who are also emotionally distant. How many ladies can say no to that? Come to think of it damn it I should have been Bronze Tiger for Halloween this year.
Posted by Shlomo Ben Hungstien at 2:00 AM