Deadshot - Boba Fett, Bulls Eye,The Punisher and Adam Strange all rolled into one 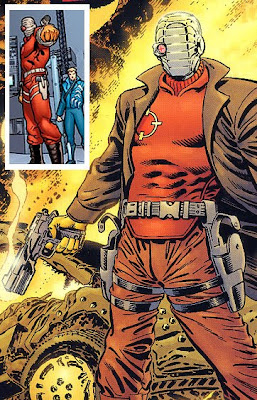 1. He has the stealthily coolness of Boba Fett and mostly only speaks when he has something worth while to say.
2. He has Bullseye's deadly sense of accuracy and a bit of his swagger at times ta boot.
3. He's no stranger to a Punisher street justice style of "urban restoration" which let's face it, makes the world a better place for law abiding everyday folks like us.
4. Now I'm sure the Adam Strange part has you all scratching your collective heads about now so allow me to give you all an explanification (Bush-ism). One of the things I always liked about Adam Strange is how he's always able to figure out a strategy for defeating super powered opponents by keeping his cool and always thinking on his feet. This is something I also really like about Bronze Tiger. In the case of Deadshot his ability to stay cool under pressure has more to do with him not caring whether he lives or dies. But between that, his experience and his talent for pin point accuracy with any fire arm he's one of the most formidable non-meta guys around.
You may be bullet proof, but you ain't Deadshot proof mofo!
What aspect I would change about the character? I would have him in the costume featured in this posting which is from his 2005 5 issue mini-series. His original costume always seemed too elaborate to me for being a guy who basically has an assortment of firear 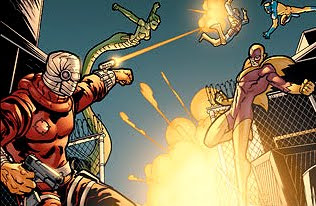 ms and explosives he uses to shoot people and things with. That costume has more of a look like some sort of high tech armor that endows it's wearer with IronMan like powers. But that's just me, I'm sure there's plenty of people out there who have a difference of opinion about that. Opinions I hope you will be kind enough to share with this blog.
Posted by Shlomo Ben Hungstien at 1:00 AM