Plastique is the bomb! Just don't call her "suger tits"

The 2007 - 2008 # 9 issue of the Suicide Squad mini-series was everything that any fan of the original 1 - 65 series could ask for and then some.
Some of the "then some" comes compliments of the French Canadian bombshell known as Plastique. If you recall she was with the Squad from their very first mission in issue 1 of the original series. And on that mission attempted to sell out the squad but was fortunately stopped by the Squad's double agent Nemesis (a.k.a Tom Tresser). There are many cool moments with Plastique like when Bronze Tiger in the middle of battle urges the other team members to not use lethal force and to only disable if possible. Plastique responds with a cool line I would more expect to come from Deadshot, "Why, killing disables them no?". 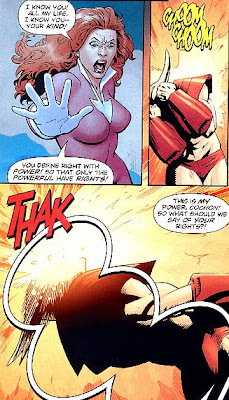 But where she really shines is when faced with the choice of loyalty or betrayal when a coup led by Gen. Eiling within the Squad ranks occurs in the middle of a mission in true Suicide Squad fashion. At first it looks like it's gonna be one of those old habits die hard kinda moments but then she surprises us. Not only does she choose loyalty to her comrades who are not part of the coup, she ends up being instrumental in putting the coup down by among other things taking out one of Gen. Eiling's co-conspirators, White Dragon.
White Dragon was the misogynistic racist rich dirt bag Mel Gibson . . er I mean William Heller who masqueraded at one time as a cross bow wielding "hero" who seemed to only be able to manage catching criminals of color. Now in possession of a powerful suite of armor and pissed off about having to take orders from a black woman he gladly joins Eiling's agenda of destroying the Squad from within and taking revenge on Waller.
But he bites off much more then he can chew when he spews his misogynistic rant at Plastique who it turns out may be something of a feminist. She basically goes O.J. on White Dragon's aryan ass and takes him out. So for me this min-series among other things was something of a road to redemption for the Plastique character. When asked by Bronze Tiger why she did not go throw with the coup that she had been originally recruited for her reasoning comes off as being very logical. But I like to thinking there was something more noble to her motivations and I'm looking forward to se 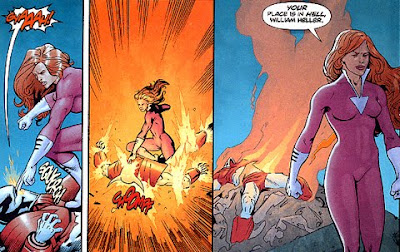 eing her in further Suicide Squad adventures. Especially if she keeps wearing that skin tight costume. Maybe we'll get lucky and see an Adam Hueys rendering of her some day. By the way is there anyone out there who speaks French and can tell the rest of us what "cochon" means?

Posted by Shlomo Ben Hungstien at 3:10 AM