JLA 18 - Vixen vs. The Suicide Squad & androids who like getting it on, then fall asleep and dream of electric sheep 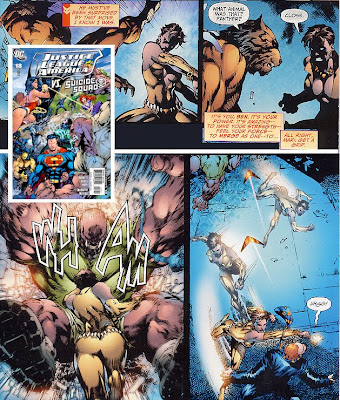 I had a posting up not to long ago about stuff I had missed over the last few years. Well I found recently in a back issue box JLA 18. This was an issue I had actually looked at when it was on the stands but opted not to get it at the time. Now that I actually have bought it and read it I can kinda see why at the time I didn't get it. In general my interest in comics was at a bit of a low around that time and if you look at the cover it pretty much eludes to some big time battle royalel between the Squad and the JLA. When in reality almost all the fighting is between just Vixen and the Squad. Which in and of it's self is pretty cool, but at the time I was hoping for something more along the lines of a "rumble" like at the end of The Outsiders (the movie) between the socias and greasers.
Interestingly enough this happened at a time when Vixen's powers were a bit out of whack in which she was using the powers of those around her (both friend and foe) instead of abilities derived from the animal kingdom. Vixen is pretty bad ass on any given day but unless your Superman or Wonder Woman you gotta have some kind of edge if your going to take on the Suicide Squad solo.

The other thing at the time was that this was a double feature issue which meant the JLA/Suicide Squad cross over was shorter then the standard 22 page comic book format. And the second story involved the red Tornado who I was never a big fan off. Mostly because of that garish look of his. He gives the original Capt. Boomerang a run for his money. In that way the Red Tornado is kinda like the Wonder Man of the DC Universe in which the creative teams were never able to put together a decent look for him over the years. But I'm glad I read that Red Tornado story anyw 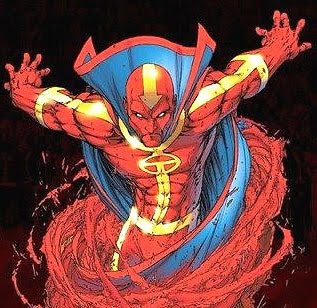 ays because it was good and gave some excellent insight into the character. Being an android, RT reminds me a lot of The Vision from Marvel. Especially the part where talks about living is among other things "making love to my wife and then smelling her scent on me after wards". So yes I'd say here's one android who can appreciate some of the upsides of being human. I think RT could stand to give Data from Star Trek a good talking too about the birds and the bees. Also, the RT story opens up with a line about droids dreaming about electric sheep. All you Blade Runner fans should have picked up on that. I want to make sure I don't conclude this posting with out mentioning that the art through out the entire issue was kick ass. If only DC would give this guy a visual make over we'd be all set.
Posted by Shlomo Ben Hungstien at 4:34 AM