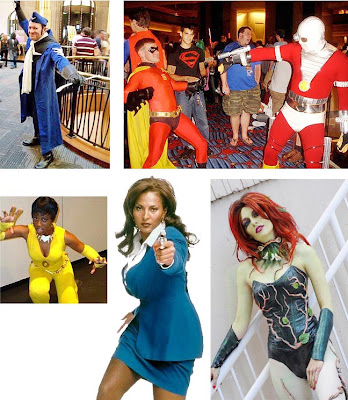 So one day I inadvertently stumbled across a photo of this guy in a Captain Boomerang costume and that made me wonder how many other Suicide Squad characters I could find costumes on the internet. I was only able to locate this Deadshot costume as far as members who were there from the beginning to the "end". But as you can see here I was also able to find costume photos of the others like Vixen and Poison Ivy who have done a "tour of duty" with the Squad.
Now I know what you all are thinking about one of the photos. Yes that is indeed the beautiful Pam Grier. As you all know she already plays Amanda Waller on Smallville. And she does a good job if you can envision the character being more attractive and having some sex appeal. Ok, lots of sex appeal because this is Pam Grier ( Foxy Brown) we're talking about after all. But when I saw this photo of her I thought this is really cool because it reminds me of Waller during those times in the Suicide Squad where she actually found her self in the field. That's another thing that makes her so cool is that she can handle herself on the political stage as well as being able to fire a gun or throw a punch when she has to. Probably her best moment was when the team found themselves on Apocalypse and Waller went toe to toe with Granny Goodness.
http://scans-daily.dreamwidth.org/1015312.html Not to mention her attempt to blow Lashina a.k.a Duchess into smithereens with what was described as a "mega-gun". This photo collage is a pretty large file so you should be able to magnify it for a better look. Wouldn't that have been smokin hot if I could have found a really nice looking athletically built woman in a well made Lashina costume during my photo search. Yes Aliera, this blog is authored by a male neanderthal just like most of the viewers.
Posted by Shlomo Ben Hungstien at 1:05 AM