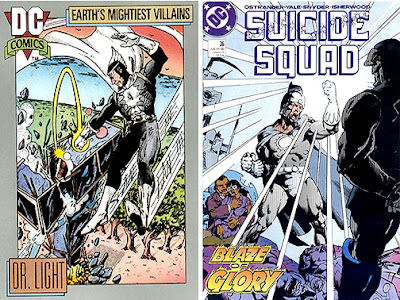 Compared to Dr. Light Captain Boomerang practically looks like James Bond. With his pathological fear of being defeated at the hands of adolescents Dr. Light was probably the biggest douche bag that's ever been with Task Force X. His inferiority complex made him go from being a whimpering coward one minute to a resentment filled vindictive sadist as we saw during the Janus Directive when he killed Sparkler from The Force of July (one of my favorite Squad kill scenes). All this being said however he definitely brought something to this book as a character. As most of us know Dr. Light would later die on Apokolips fighting with the rest of the kidnapped Squad against Darksied's army in a futile attempt to assert his man hood. In what was one of the oddest Suicide Squad issues ever Dr. Light managed to come back to the land of the living and attempted to rejoin The Squad but Waller would have none of it.

In the post Suicide Squad series era of the old DCU  Dr. Light would become quite a controversial character. First with it being revealed that he was a sexual predator in addition to being a super villain. Soon after wards the decision to have Zatanna mind wipe him would cause fractures in the JLA over the ethical implications of such a procedure. I certainly didn't have a problem with it, as far as I'm concerned Light was lucky not to have faced the possibility of castration.
Posted by Shlomo Ben Hungstien at 12:00 AM