Captain Boomerang & Captain Cold: From The Suicide Squad to The Rogues

It seems lately some really cool DC Universe action figures have been turning up on the internet in these nicely staged settings. This one here of Captain Boomerang, Captain Cold and The Flash in this urban setting is the latest one I've come across. Ofcourse I need not get into the extensive history of Boomerang's time with The Squad but in case some of you didn't know Captain Cold was with The Squad too for issues 16 - 18. Initially he was recruited to help apprehend some criminals from another dimension but soon after was coerced by Rick Flag to join the rest of  The Suicide Squad in taking down the Jihad when they attacked Manhattan. Eventually both Boomerang and Cold would find themselves in the criminal collective known as The Rogues. Also on a side note, before The Rogues were formed Mirror Master also worked for The Suicide Squad secretly at the behest of Amanda Waller as The White Queen of Checkmate (see Checkmate 6 & 7 Vol. 2). 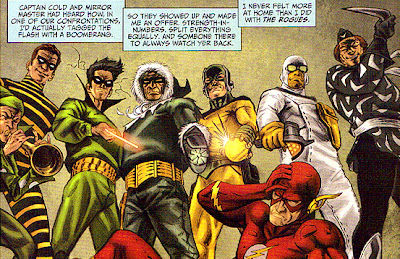 As you can see ol Digger was quite happy with The Rogues. More so then he was with the Suicide Squad, but then again one of  the differences between The Squad and The Rogues is that most members of The Squad aren't there because they want to be. Come to think of it the same thing could be said about Deadshot with The Secret Six. Interesting when you think about it that by the time the old DCU came to an end two of the Suicide Squad's original members were with other teams.

Although that's not be entirely true, Boomerang was never able to get back in with The Rogues after his Brightest Day resurrection. Things got complicated with them and Boomerang even found him self at odds with Captain Cold. He was last seen as a solo criminal again in the final issue of  Red Robin (#26) late last year right before the DC reboot. By the way,  I think that's cool how the Captain Boomerang action figure packaging card biography mentions both the Suicide Squad and The Rogues. 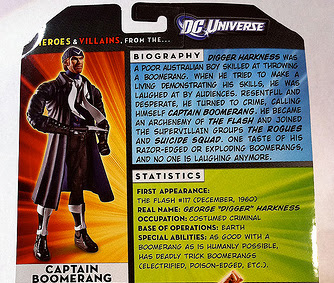 Posted by Shlomo Ben Hungstien at 12:00 AM