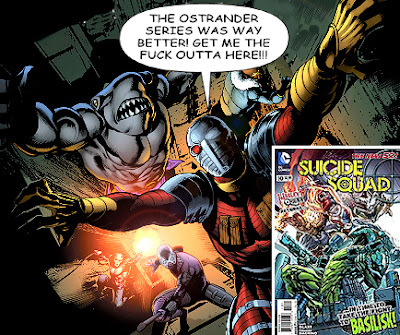 REVIEW: Basically, The Squad responds to a hostage situation in Seattle that Basilisk had going on. Only later in the issue we discover the hostages were just a rouse for some unknown reason. The only thing of any real interest going on in this issue to me is that we find out that Waller knew King Shark was going to eat Yo-Yo (#5) but let it happen anyways in order to test a theory she had about Yo-Yo possibly being indestructible.
On a general note about Waller,. in the old DCU she was tough and had to be a bitch once in a while as a matter of practicality. This rebooted Waller just seems to be a bitch for the sake of being condescending most of the time and it's starting to get on my nerves. There's something to be said for an Amanda Waller who understands subtly and using a little "carrot n' stick" strategy when dealing with hard cases like the members of the Squad.

Here we go with some straight talk about how I'm feeling about this title right now. When they rebooted the Justice League it's not like they substituted a bunch of the mainstay leaguers with the characters like the Wonder Twins or Plastic Man. So really I don't know why Adam Glass had to go and fuck with the Suicide Squad so drastically!? Now don't get me wrong because there are characters on The Squad I really do like ( Harley, Black Spider, Diablo etc.) and want to see continue on the team. But I'm at a point now where I really want to see some familiar faces from the Ostrander series too. Chief among them is Captain Boomerang and Bronze Tiger but Rick Flag, Count Vertigo and Nightshade would also make for welcomed additions.
Truth be told although I really did like this book at first but there's been some shit that's been bugging me for a while. First they introduce Boomerang and then take him out of the picture again right away and we haven't seen him again since. Then they have Vertigo on the cover of Resurrection Man #9 but otherwise no where to be found. Checkmate, which is part of Task Force X has only had a mere mention in what's been 10 issues now. The new guy Iceberg has the lamest look since Boomerang's original costume in the old DCU. A black guy with a white fur coat and a white mohawk along with some Bono like yellow spectacles gimme a break! Also, are we ever gonna see Bronze Tiger in the new DCU much less in this book!? Plus I think it's getting to the point where the writing on this book is relying too heavily on Harley's constant mental instability. And yeah I still fucken hate the name Basilisk.

We've talked to death now on this blog the merits for the rebooted Squad to look more like the Ostrander series or less so. I don't need this series to be a slavish carbon copy of the old DCU Squad but to put it succinctly I do indeed want it to look something closer to it then it does now. I'm not gonna try to rationalize or other wise justify my feelings on that any more then I would about why I like checking out hot women in high heels and mini skirts. That's just what I like and that's what I want to see. Same with this book. I'll keep picking it up for now but that will change if Adam Glass doesn't take things in a different direction soon. 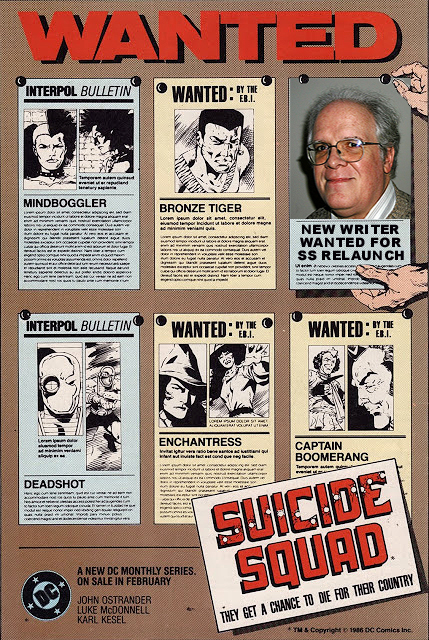