Captain Boomerang and what goes around 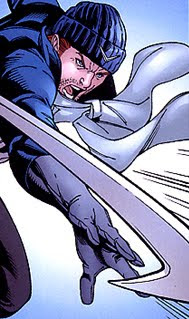 So I picked up the final issue of Red Robin (#26) yesterday so I could see what's been going on with the newly reselected Digger Harkness since the end of the Brightest Day saga. My first thought was did DC Comics really name a character after the restaurant chain cause It's the first time I'm hearing about this guy. Anyways, some important background information is that Digger killed Robin's father (Jack Drake) back during the Identity Crisis series.
So naturally Robin (gonna just call him Robin for short) wanted revenge but having been an understudy of Batman was conflicted about killing Boomerang out right. So he sets Boomerang up on a false heist to steal some Black Lantern energy from S.T.A.R labs. Boomerang is under the impression that the energy needs to be harnessed under extreme cold temperatures which prompts him to bring it to Mr. Freeze. It is soon discovered that the Black Lantern energy is just a bunch of bullshit which brings the two villains into conflict. Apparently trying to steer Digger into doing something haphazard was part of Robin's plan. But just as Boomerang and Freeze are about to throw down Robin intervenes out of a sense of inner conflict over wanting to deliver the death blow to Boomerang personally as opposed to someone else.

Freeze is rendered unconscious as Boomerang flees the scene but is pursued by Robin to a roof top. A fight ensues between the two. A clash of throwing weapons causes Boomerang to get hit by one of his own rangs sending him over the edge. By the way did I mention how awesome the art work is in this issue? Be sure to left click on the clip art. Dan if your reading this I got your splash page right here mate! 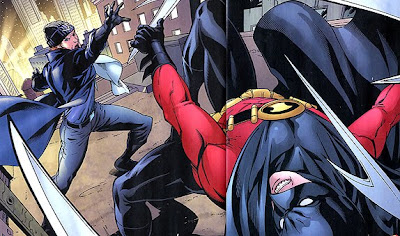 Do you all remember that scene at the end of Batman The Darknight where he flips The Joker off the roof top but saves him from falling to his death with a grappling line? Well that's basically what happens here.Captain Boomerang has always been a bit of a weasel. But it seems like these days good ol Digger has more of a back bone. One of the side benefits of coming back from the dead I suppose is that you have more confidence. Digger has always had a sense of cockiness but I always got the impression it was largely a front to cover up a lot of insecurity he was carrying around with him. So as I'm sure you guessed Robin spares Boomerang's life in favor of justice over vengeance. Shortly there after Freeze and Boomerang are t 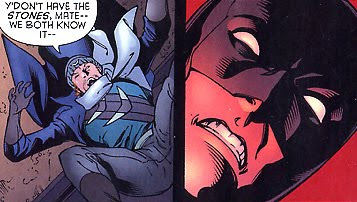 aken away by the police. Keep in mind that at the end of Secret Six #36 which is the final issue both Deadshot and King Shark are also arrested which I imagine has something to do with them being back in The Suicide Squad for the relaunch. Which means perhaps . . . well you know where I'm going with this. For a more comprehensive review of this issue go to http://superpowersthatbe.blogspot.com/2011/08/old-dc-red-robin-26-finale-review.html?showComment=1313483473692#c4938194806475292976