From Darkseid to iran's ayatollah khomeini, whatever evil you fear most I can't believe I've had this blog going for almost a year with out mention Shade The Changing Man yet. He first appeared in Suicide Squad #16 and was last scene in issue 37. Shade is a security officer from another dimension who coincidentally encountered the Squad on a mission in the "Shadow Zone" and through a twist of fate got stuck on Earth after the Squad made good their escape.
Shade somewhat reluctantly agrees to join the Squad under the promise that the resources of the govt. will be put to use in an effort to return him to his own dimension. But over time due to the inferior technology on Earth he becomes increasingly frustrated with the prospect he may never get back. Despite being a pretty noble guy he goes against his better judgement and helps Duchess a.k.a Lashina abduct the Squad for her Apocalypse mission for which in return she's supposed to get him back home using the superior technology of the New Gods. But he eventually turns on her as his conscience gets the best of him after witnessing her cruelty to the population of Apocalypse as well as to the Squad http://goodcomics.comicbookresources.com/2011/08/11/almost-hidden-the-suicide-squad-travels-to-apokolips/ Shade is returned to his own dimension when Darkseid expels the Squad off of Apocalypse with his omega beams returning everybody to where they came from.
Shade wore a special vest that detected the fears of others around him and projected a force field in the image of those fears. The force fields appeared to mimic his body movements. In the clip art here you can see him pummeling Peacemaker who sees Shade as his abusive military father who apparently bullied him through out most of his child hood. On Apocalypse we see the vest project the image of Darkseid for a brigade of parademons that Shade was fighting. 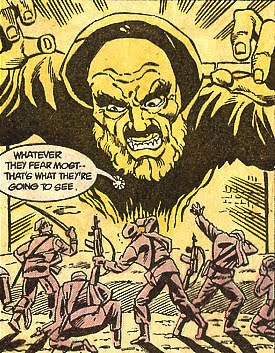 Probably my all time favorite moment with Shade in the pages of the Suicide Squad is in issue 32 in which the Squad under takes a mission in iran. During the battle with iran's military Shade's vest projected the image of the ayatollah khomeini to the soldiers. As you all may or may not be aware of the ayatollah khomeini is the fanatical islamic religious cleric who took power in the late 70s during the iranian revolution. Today the iranian people still live with the legacy of being in the grip of a religious dictatorship under the tyrant ahmedinejad and the mullahs (religious ruling party).
This is not only another a case of how art imitates life but also how insightful of a writer John Ostrander was when it came to weaving real world facts and politics into the stories of the Suicide Squad. And keep in mind this was long before the "arab spring" this year in which we're seeing one tyrannical regime after another fall in the midst of uprisings all over the muslim world in the Middle East. Just recently gaddafi's reign of terror for over 40 years in libya finally came to an end last weekend and we can only hope the bashar assad regime in syria will be next. Of course despite all this most any moronic useful idiot liberal of the San Francisco Bay Area will be quick to blame the United States and Israel for the decades of turmoil in the Middle East. Thank goodness John Ostrander was a more intelligent and objective thinking person who didn't suffer from the social disease known as political correctness which has infected most of the world and Europe especially. 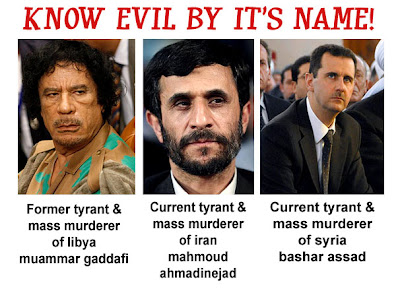 Posted by Shlomo Ben Hungstien at 9:08 AM