Countdown 22: Trickster, in the line of Deadshot's fire 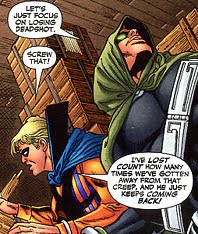 So before I start to talk about this issue I want to remind everybody that the events in Gotham Underground lead right up to DC's Countdown (to Final Crisis) series. Also, right before I found this issue in a $1 bin I had flipped through a Countdown TPB in which we see Trickster and Pied Piper having managed to elude the Suicide Squad a couple of times already. Each time it seemed to piss Deadshot off more and more. Well eventually Deadshot catches up to them on his own after they decide to stow away on a train. Despite having surprise on his side Trickster and Pied Piper manage to stay out of Deadshots line of fire by using every trick in the book when it comes to distractions and surprise attacks. With his patience coming to it's whit's end he gets a call from Waller who is not at all pleased with his unauthorized solo mission. And as you can read here in the clip art the conversation was somewhat less then cordial. Be sure to magnify the clip art for easier reading.

So as you can see that went well (yes a wee bit sarcastic). Can you just picture how Waller must have been like on the other end of that line? Probably threw the phone or whatever communication device she was using out the nearest window provided it wasn't something that was bolted down or really really heavy. Deadshot catches up to the duo again and a skirmish breaks out in which they manage to throw Deadshot out an open door. But he gets a hold of Trickster's cape and drags him out too. Thinking Trickster is out of it Deadshot attempts to give Piper a "parting shot" but Trickster despite having been dragged on the ground leaps to Piper's defense and in the line of fire.

Countdown 22 came out in November of 2007 with Salvation Run #2 coming out just a few months later in early 2008. I mention this because as you all should know by now that Salvation Run #2 is where Waller and Flag trick Deadshot into exile (along with Bane) to the prison planet for being too "unstable" http://suicidesquadtaskforcex.blogspot.com/2011/07/just-found-salvation-run-2-in-1-box-so.html. Of course he eventually escapes the planet thanks to Lex Luther's ingenuity and later become part of the Secret Six. And in the Suicide Squad Secret Six crossover in Blackest Night (2010) Deadshot puts a bullet next to Waller's heart http://suicidesquadtaskforcex.blogspot.com/2011/02/because-you-didnt-demand-it-suicide.html (yes folks she really has a heart) which again begs the question how the fuck does Deadshot manage to fine himself with The Suicide Squad again? This is one of my biggest fears about the reboot is that he'll just be back with Task Force X with out any explanation. I know the reboot is suppose to be about new directions for these titles but history like that can't just simply be dismissed.
Posted by Shlomo Ben Hungstien at 12:02 AM

Email ThisBlogThis!Share to TwitterShare to FacebookShare to Pinterest
Labels: http://www.blogger.com/img/blank.gif