25 Year Suicide Squad Anniversary! Get up to speed with my handy dandy quick reference timeline

As I was compiling this time line I realized that The Suicide Squad has spanned a quarter of a century now! As a more comprehensive follow up to my Youtube video I decided to create this time line to get all Suicide Squad fans both devoted and fair weather ones up to speed in time for the DC relaunch next month. Over the 25 years of Squad history there have been numerous what I call stand alone appearances/adventures involving the Squad and or single members of the Squad. You may notice the time line doesn't include most of those Suicide Squad tie-ins that have been published but I feel it includes the most relevant books to the continuity of the mythology. The only exception being the 2002 series which I felt should be included for archival purposes seeing as it is technically speaking the 2nd Suicide Squad comic book series. And besides, including absolutely everything that's ever been published having to do with The Suicide Squad would take forever and contrary to popular opinion I do have a life outside of this blog. 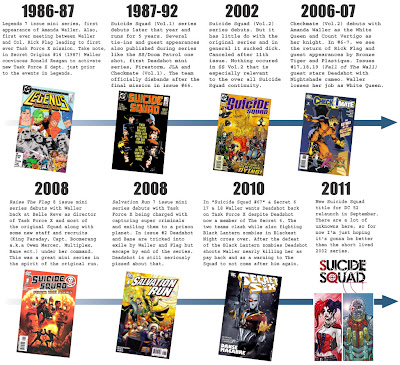