Raise The Flag: An overview of this pivitol 2008 mini-series 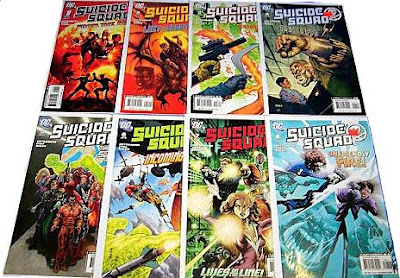 As I was putting together my time line I wasn't able to find a really good summery of this fantastic and important series any where outside of The Suicide Squad's Wikipedia page so I thought I'd put this posting together today. By the way this series is also available in trade paper back form.

The first three issues primarily deal with the details of the return of Rick Flag who was presumed dead from a solo suicide mission to destroy the meta human for hire terror group known as the Jihad (Suicide Squad #26 Vol. 1). Remember the good ol days back in the 80s when nobody knew what that word meant? Although the Checkmate title (issues 1-20 Vol.2) had already started bringing The Squad back gradually in a piece meal fashion it wasn't until the Raise The Flag mini-series did we get the full story on Flag's return. That storyline (told in a flash back style) having to do with him and Rustam (leader of the Jihad) being mystically transported to Skartaris instead of having been blown up with the Jihad HQ. There they had to work together to survive in a dinosaur infested land. But eventually the arch enemies go mano e mano and Flag has to put him down permanently cause he's bad ass that way. He's then mystically returned to Earth and winds up in the middle of some trouble that lands him in jail in some Asian country for several years until rescued by Bronze Tiger.

After that story is told the series picks up with Waller getting things in order at Belle Reve prison with her now having her old job back as director of Task Force X which as you all should know by now is the official govt. name for The Squad. They're about to under go a new mission with the objective of taking out this global corp. called Haake-Bruton that has developed a fast acting viral weapon and as director of Task Force X it's her job to determine what meta human prisoners are suitable for the mission. The final selection is made up of many members from the first SS series but also several brand new recruits as well. Of course true to form the mission has all sorts of problems including betrayal by a few Squad members along with a surprise or two that nobody saw coming. Sometimes I wonder if historical military disasters like The Bay of Pigs or the failed hostage rescue in iran by the jimmy carter didn't help inspire some of these Squad stories.
But I'm happy to say that at the end of the day the mission is accomplished even though nearly everyone of the new recruits ends up dead. At the end of the final issue the Squad is made up of Rick Flag, Bronze Tiger, Captain Boomerang (Owen Mercer), Plastique, Multiplex, Gen. Eiling (in the Shaggy Man's body), Bane, Count Vertigo and Deadshot. King Faraday who was Amanda's bishop at Checkmate is her right hand man for administrative matters. The events of Salvation Run follows the end of this series shortly after as indicated by the time line posting.

There are of course a bunch of nuanced things in regards to the characters and the story line in this mini-series summery I didn't cover but for the sake of not making this posting too long I kept it fairly brief. But I think I covered the most important stuff especially as it pertains to the make up of Task Force X as the continuity moves forward into Salvation Run. With that being the case I'd be happy to go over anything in the comments section I may have over looked that was worth mentio 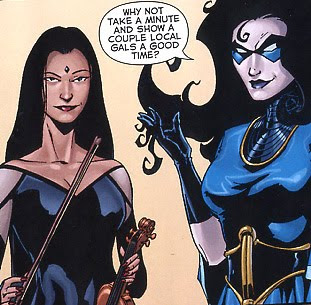 ning.
On a side note here I just wanted to mention that about a year and a half later during the Secret Six Suicide Squad Blackest Night cross over Gen. Eiling and Plastique for unknown reasons are no longer with the Squad. Captain Boomerang had become part of The Rogues but was later killed by his father (original Captain Boomerang) who was resurrected by a Black Lantern ring. And of course you know by now that Deadshot and Bane are with The Secret Six. However, Nightshade had returned to the Squad along with solo mission recruit Virtuosa, who's powers are similar to that of The Fiddler.
Posted by Shlomo Ben Hungstien at 9:44 AM