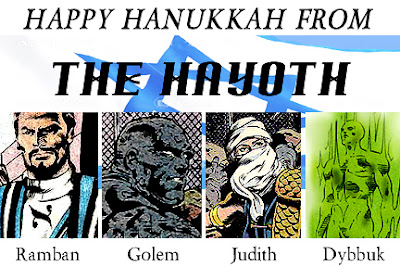 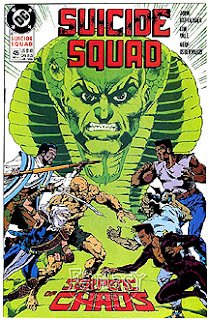 For some reason I'm in the mood to do a Hanukkah theme posting featuring the Israeli meta human team The Hayoth which were co-created by John Ostrander and first appeared in Suicide Squad #45. Yesterday was the first day of Hanukkah so I decided to treat myself at my favorite Jewish restaurant appropriately named Holy Land which is in Oakland. As luck would have it just a few blocks away as I was leaving their happened to be a public menorah lighting so it all made for a nice evening.
Contrary to popular opinion Hanukkah is not the Jewish version of Christmass. In fact it's not even a religious holiday. Hanukkah celebrates an unlikely victory of the Jewish rebels known as Maccabees (hebrew for hammer) over an invading Greek army. A lantern was lit as a tribute to the victory but despite only having enough oil for 2 or 3 nights it some how continued to burn for 8. Hence, "8 Crazy Nights". If you haven't seen this video I made last year check it out it features Jewish superheroes from both DC and Marvel http://www.youtube.com/watch?v=OVRWGClMRDw&feature=player_embedded
Posted by Shlomo Ben Hungstien at 9:01 PM