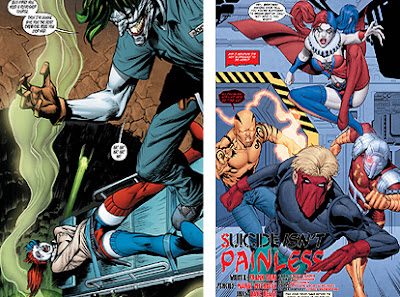 For those of you who read my other blog you may know already that I was back issue hunting after work last night. While there I noticed Suicide Squad #15 was out already which surprised me since I thought #14 just hit the shelves only a couple of weeks ago or there abouts. Just goes to show you how much of a disconnect I have with new comics these days. But since I was there I browsed it a bit and it apparently looked like little more then Joker/Harley story. I think the only other thing of any significance in the issue was Deadshot turning out to not be dead although that hardly came as a surprise.
I noticed the cover of Grifter #15 had Deadshot on it and it turns out that some other members of the Squad are in it too. But it seems to me that Harley has had her hands a little too full lately with the last Squad mission and now the Joker to be on a Squad mission going after Grifter for what ever reason. Plus, didn't Deadshot just "come back to life"? I dunno I suppose this isn't the first cross comic book titles that lacked some consistent continuity we've ever seen. Just for the record I didn't care enough about any of this to buy either issues it was just some thoughts I had upon discovering these issues on the shelves last night. Good art work in both issues though I can't much complain about that.

I went to go see if the tessatechaitea.blogspot had done reviews of either issues yet but didn't see any so far however the Aquaman review offered a little something that I found somewhat interesting so I did some further looking into. Apparently Waller is trying to recruit Black Manta for the Squad but so far is not having much success. Good art work in that issue to you can read more on that here: http://www.comicbookmovie.com/fansites/JoshWildingNewsAndReviews/news/?a=70357 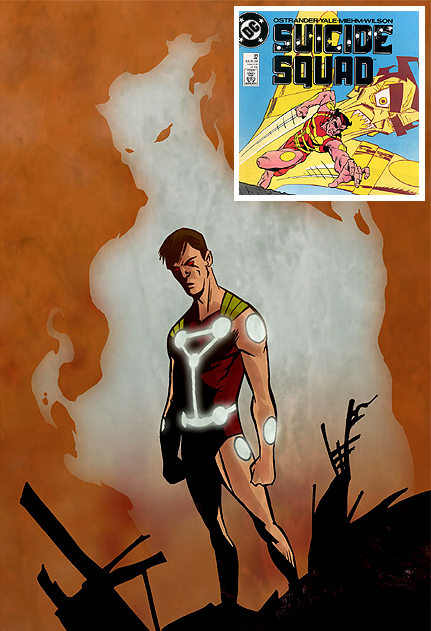 Ok now back to the Ostrander Squad for a bit. I'm adding this Shade the changing man fan art into this posting as an after thought. This has been on Deviant Art for a long time and I've thought about posting it before. The thing is, I like it over all but it just has one thing that I REALLY wish was different. I like the use of color, the shading and the over all line work style along with the low keyed mood. But his legs are too damn small! That might just be the artist's style but his legs not quite being in proportion with the rest of his body is the only thing that keeps this from being a great rendering in my eyes. I'd certainly be happy to get some input on this from other people out there.