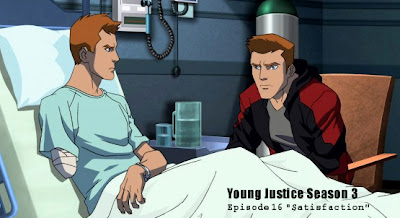 So after yet another weekend of no Young Justice I decided to do some investigating to what the @#$% is going on. Apparently it's just a matter of the season (#3) being over. No solid information on if and when there's going to be a season 4 although I'm assuming there will be one eventually at some point next year. What a bummer, and I gotta tell the new Arrow series is by no means giving me any sort of YJ hold over fix for the time being. I've seen a couple episodes now and the show's not doing much for me to be honest. I don't think it's bad, so I understand if it holds some appeal to others but while watching it so far I can feel my attention drifting during the episodes which is not a good sign.
For those of you who might want to get up to speed with season 3 here's a complete list of the episodes. I can tell you that at least some of the full episodes of the tale end of the season such as Before the Dawn, Satisfaction (Roy Harper bad ass!) and Darkest can still be easily found on Youtube. 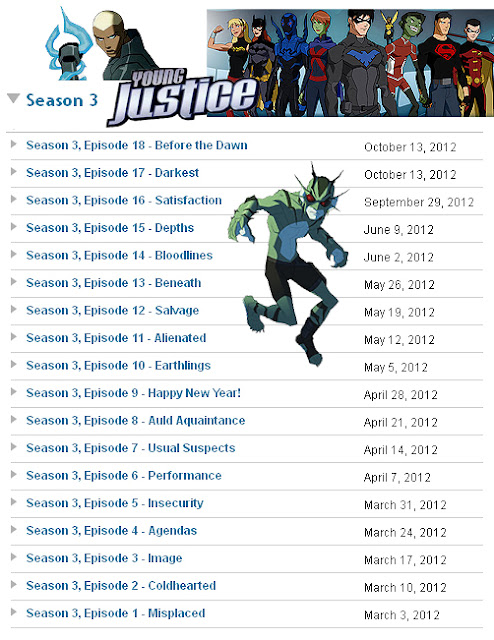 Just adding this as an after thought. This lady who goes by the handle of White Lemon on Deviant Art really goes all out for the love of cosplay. It looks like some of the final images utilize photoshop work to enhance her costuming but it all comes together pretty nicely as a finished product. I would really like to see her do Nightshade and Plastique I think her technique would be great for those Squad ladies as well. I was at comic shop last night and I was browsing at Suicide Squad #14 and I had to admit the dialogue with the Joker at Deadshot's "funeral" was pretty funny. Especially with the whole post mortem circumcision schtick. Another good reason why I want to be cremated I don't want sharp objects next to my junk for any reason dead or alive.

She does a bunch of other cosplay you outta have a look at so here's a link to her Deviant Art gallery: http://whitelemon.deviantart.com/gallery/ As if this can't get any better she happens to be from Spain. Time to brush up on your Espanol fellas! I just totally dig when I learn about people from foreign countries who embrace the comic book and sci-fi stuff from America as passionately as White Lemon does here. And speaking of which why can't I ever find a woman like this here?

Posted by Shlomo Ben Hungstien at 10:25 AM