When a Martian meets a woman 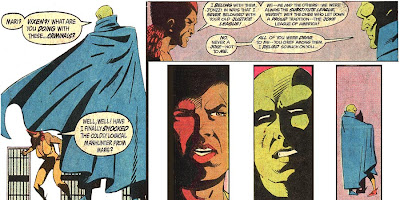 This is cool how wildly popular Vixen is turning out to be with so many of the people who actually spend time out of their busy lives on this blog for what ever reason. And I noticed that the dude who runs the Martian Manhunter blog http://idol-head.blogspot.com/2010/11/1996-martian-manhunter-oil-painting-by.html has become a pawn recently. In keeping with the Checkmate theme I call the followers of this blog pawns so just bare with me folks. So that all has inspired me to share one of my favorite moments between two great DC characters who at a point and time found themselves on different teams during a confrontation while in Russia. But instead of a fight between The Martian Manhunter and Vixen we are treated to a rare heartfelt moment between these two who obviously have a lot of love for each other. Not a romantic or sexual kind of love despite how cool and kinky that would be but more of a Kirk and Spock kinda love. You may have to left click and then magnify the image to read the text clearly.
By the way, did you know that the voice actors for the Martian Manhunter and Vixen on the Justice League cartoon were Carl Lumbly and Gina Torres? You may know Lumbly from the short lived sci-fi TV series called M.A.N.T.I.S in which he a paraplegic scientist who wore a exo-skeleton suite and fights crime. Torres you may know from the sci-fi TV series Firefly and a movie based on the show called Serenity in which she played this hot ex-military type turned mercenary on a pirate space ship kinda like the Starjammers in the X-Men. 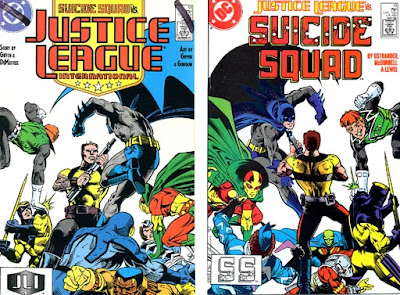 Also take note of the cool cover art that was used for the covers of the JLA and Suicide Squad issues that the confrontation between the two teams takes place in. Notice it's the same scene just drawn from different angles for each cover. Quite ingenious I must say. I can't think of any other time this sort of creativity for a cover was ever utilized.
Posted by Shlomo Ben Hungstien at 12:30 AM